New Order: At Gray Jay in Ottawa, Canada is on the menu

The Canada jay — also known as the whiskey jack, the gray jay or simply Perisoreus canadensis — is an iconic Canadian bird, but it is not Canada’s national bird. Nor is the common loon, the snowy owl or the Canada goose. The reason for this is as surprising as it is simple: Canada doesn’t have a national bird. Not officially, anyway. Similarly, while Canada is home to countless talented chefs creating innovative dishes from Tofino to St. John’s, we have no officially agreed-upon definition of a Canadian cuisine. At Gray Jay, a fledgling fine-dining restaurant in Ottawa, however, chef Dominique Dufour is making strides towards creating one.

“If you look at all great gastronomies, like French or Italian or Spanish or Japanese, what makes those flavours so unique and appealing is the fact that they’re only exploiting what’s around them,” says Dufour, who is seated at the bar of the small 27-seat restaurant in Ottawa’s Little Italy. “If you look at Italian food, it’s tomatoes, it’s sheep’s milk cheese aged in caves, it’s the wines that grow on the side of their mountains. It’s all of those little details that come together to give you a sense of identity and a sense of pres- ence in that moment and in that region.” 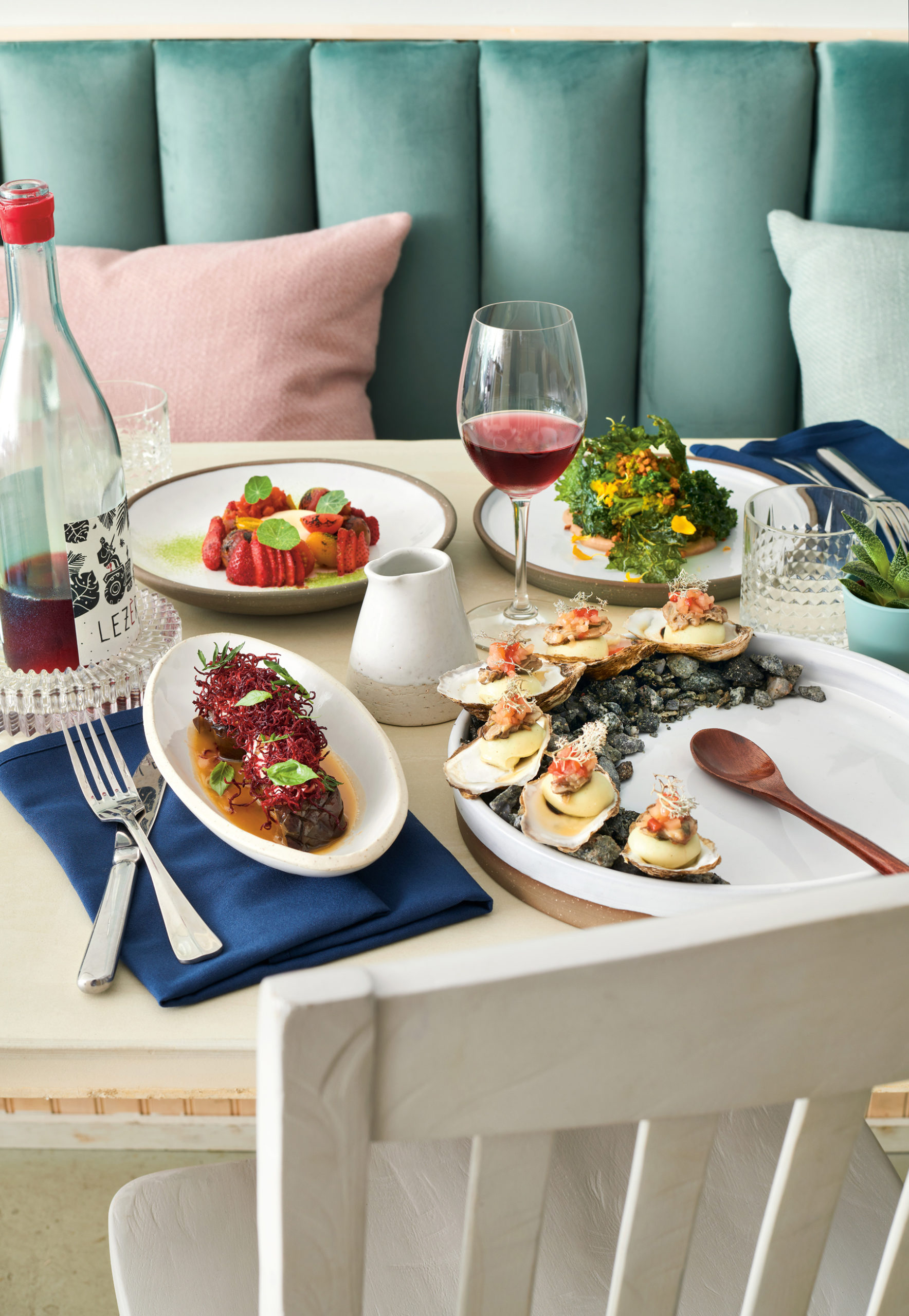 Canada, of course, is not Italy. For one thing, it’s far larger, spanning an entire continent’s worth of sparsely populated landscapes and regions. For another, it’s younger, more diverse and defined in large part by the wide variety of people and cultures who call it home. And then there’s the added challenge of a landscape that’s snowed under for half of the year. This is the problem Dufour and her partner, Devon Bionda, set out to solve when they opened Gray Jay in the summer of 2019. Their solution was simple. If gastronomy is defined by geography, they would serve only things that grow in Canada, sourced as close to their restaurant as possible.

Gray Jay is not the only restaurant to have a go at defining Canadian cuisine by celebrating locally sourced ingredients, of course. Chefs have been innovating farm-to-table cuisine in Ontario for decades, like Jamie Kennedy and Michael Stadtländer, while Jeremy Charles has earned an international reputation for his dishes celebrating the coastal terroir ofNewfoundland at Raymonds Restaurant. Gray Jay, however, goes further. By relying solely on what can be grown, farmed, fished and foraged within Canada’s borders, they do without a host of pantry staples. Coffee, chocolate, cane sugar, citrus, cinnamon and black pepper are all forbidden in Gray Jay’s kitchen. 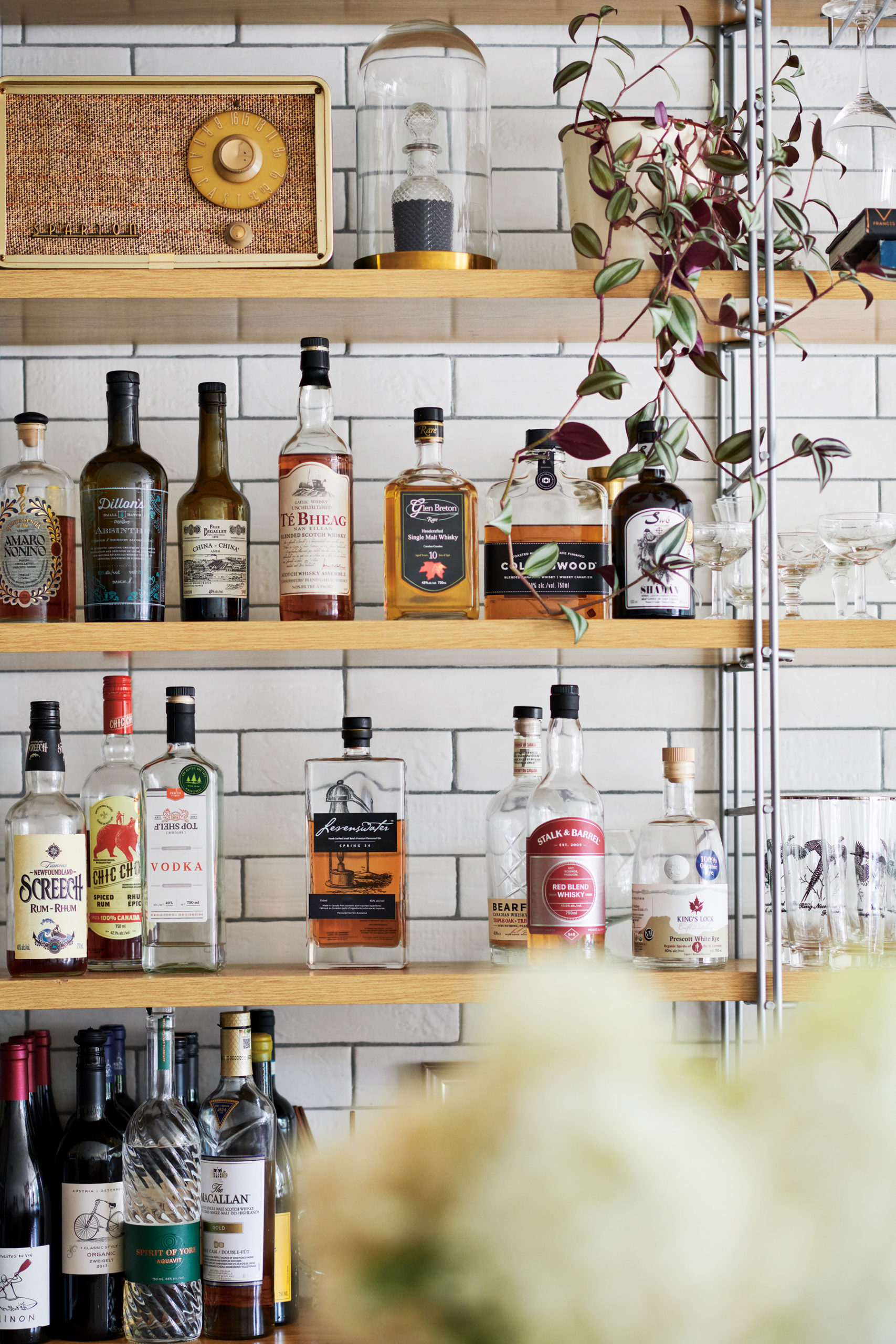 Dufour credits chefs like René Redzepi and Magnus Nilsson for pioneering this concept of hyper-local northern cuisine, and she takes inspiration from their cooking in her ever-changing tasting menu. At Copenhagen’s Noma, Redzepi became one of the world’s most revered chefs by preparing archaic local ingredients in unconventional ways and experimenting with fermentation. Nilsson went further still, enticing guests to a remote acreage in rural Sweden to eat strange, artfully prepared dishes such as broth flavoured with cultivated indigenous straw mould and scallops cooked in their shells over juniper branches.

“That was a huge influence, not necessarily on the way we cook but the way [Nilsson] doesn’t buy into the construct of what a meal should be,” Dufour says of a pilgrimage she made with Bionda to eat at Nilsson’s restaurant, Fäviken, in 2018. She lights up while describing the dozens of courses in Fäviken’s tasting menu that lasted late into the night and the entirely new flavours they experienced there. “It was really enlighten- ing as to how food, ingredients and textures work together to make you feel things,” she notes. “That was a huge thing for both of us.” 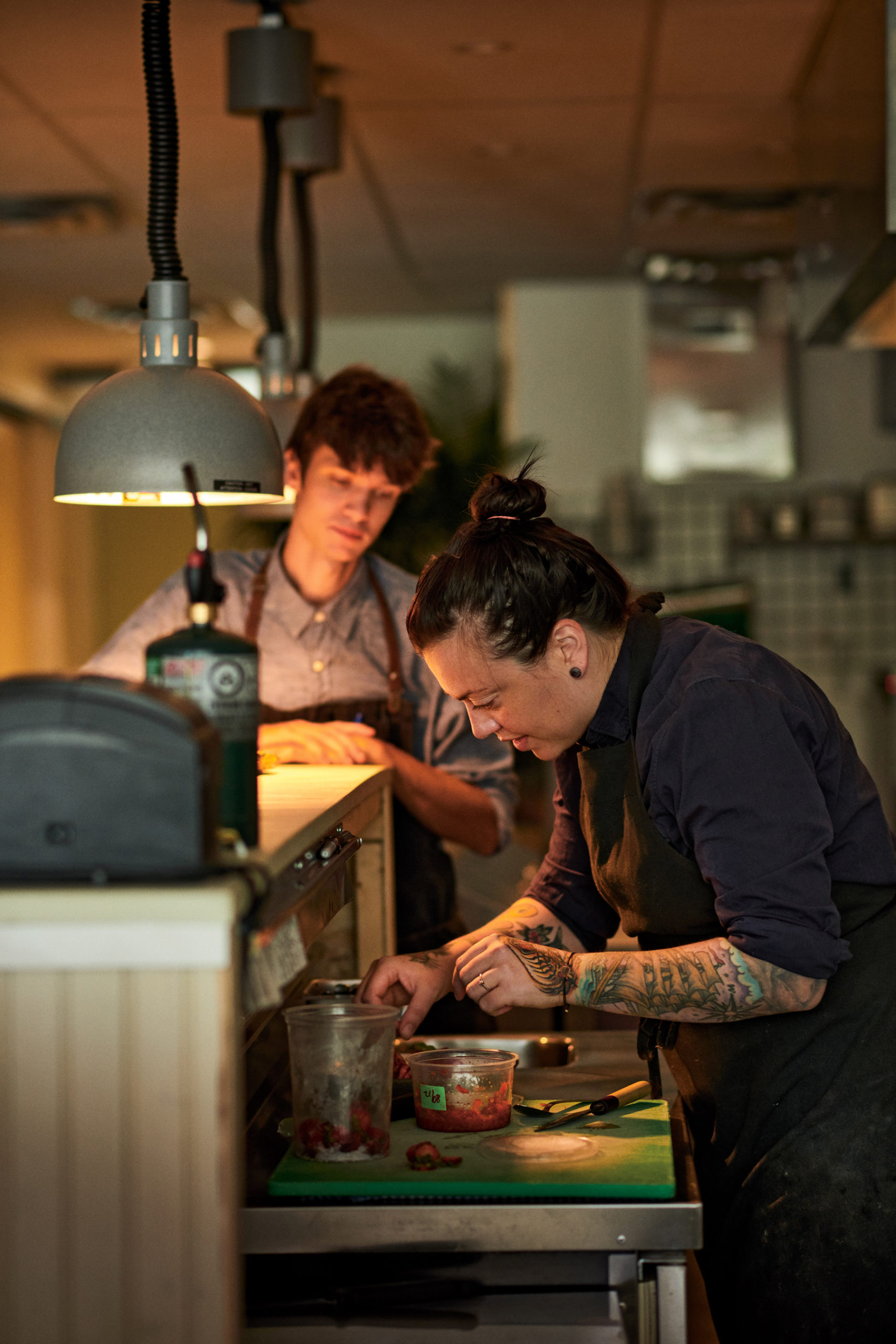 To build their innovative menu at Gray Jay — in January it featured Newfoundland scallops served with pickled daikon, spruce tips and sea- weed oil, and dry-aged local duck with sprouted lentils and fermented carrots — Dufour and Bionda draw from a well-stocked larder of ingredients both conventional and unusual. Dufour praises the sidestripe shrimp from B.C., which, when in season, she seasons with house-made lilac-flower vinegar to complement its natural sweetness. In winter, bushy kohlrabi microgreens — grown indoors and a five- minute drive from the restaurant — add colour and a peppery crunch, while bright yellow sea buckthorn berries from the Gaspé Peninsula provide a citrusy zing.

“We’re just a bunch of nerds,” says Dufour, laughing as she shows off her experiments in crafting flavours and textures that might some- day earn a place on Gray Jay’s menu. Beneath the bar a clay crock holds a balsamic vinegar made from Canadian-grown St. Croix grapes and pinot noir (“Devon studied in Italy and one of the things that he was missing most was balsamic vinegar, so we decided to have a stab at creating our own,” she explains). Next to that is a jar of elk meat fermenting in brine — an ancient Roman fermented-fish seasoning called garum — that will eventually be used as an umami-rich base for sauces. Elsewhere, a bak- ing tray of foraged reindeer moss cures among containers of dried sunchokes and handmade fireweed vinegar. To Dufour and Bionda, the restrictions imposed by Canada’s short grow- ing seasons and northerly latitudes aren’t a handicap so much as an invitation to creativity. “This is my weird spot,” she says of her kitchen- turned-science lab. “We go balls-to-the-wall and people just have to be on-board with it.”

So far, they seem to be, with customers regularly filling Gray Jay’s reservation book for a chance to taste Dufour’s creations — including Prime Minister Justin Trudeau and his wife, Sophie Grégoire Trudeau, who stopped in recently for a weeknight dinner. Like most people who visit Gray Jay, they ordered the tasting menu.

Barely one year in existence, Gray Jay hasn’t yet succeeded in creating a new definition of Canadian cuisine, but like its namesake bird, perhaps that doesn’t matter. Gray Jay simply could not exist anywhere else.

By Jeremy Freed. Photos courtesy of Christian Lalonde/Photoluxcommercialstudio.com. *This article originally appeared in INSIGHT: The Art of Living | Spring 2020

High-End Dining: An unforgettable meal in the sky