Turkey, the birthplace of the Byzantine and Ottoman empires, has one of the oldest civilizations in the world. Journey through this peninsular country straddling Europe, Asia and Africa and encounter, at every turn, its glorious storied past. Stroll on cobblestone streets leading to 14th-century mosques and magnificent Byzantine churches, bustling bazaars and lively restaurants serving up traditional and fusion cuisines. Go on a hot air balloon ride in Cappadocia for a magical bird’s-eye view of this historic region’s ethereal landscape of pinnacles, mushrooms and fairytale chimneys.

A rich, eclectic mix of ancient and modern with cultural links to both East and West, Turkey offers a plethora of travel incentives — manmade and nature’s own — sure to delight visitors.

ISTANBUL
The country’s most populous and most visited city is Istanbul, formerly known as Byzantium, then Constantinople. Sycamores and cypresses thrive here, offering a welcome green respite from the bumper-to-bumper urban traffic and the European-style trams shuttling tourists to and from the now-gentrified 14th-century Galata district, where gleaming new hotels and ancient structures provide Instagram-worthy opportunities. Architectural and cultural landmarks abound in this cosmopolitan city, so plan on staying a few nights. 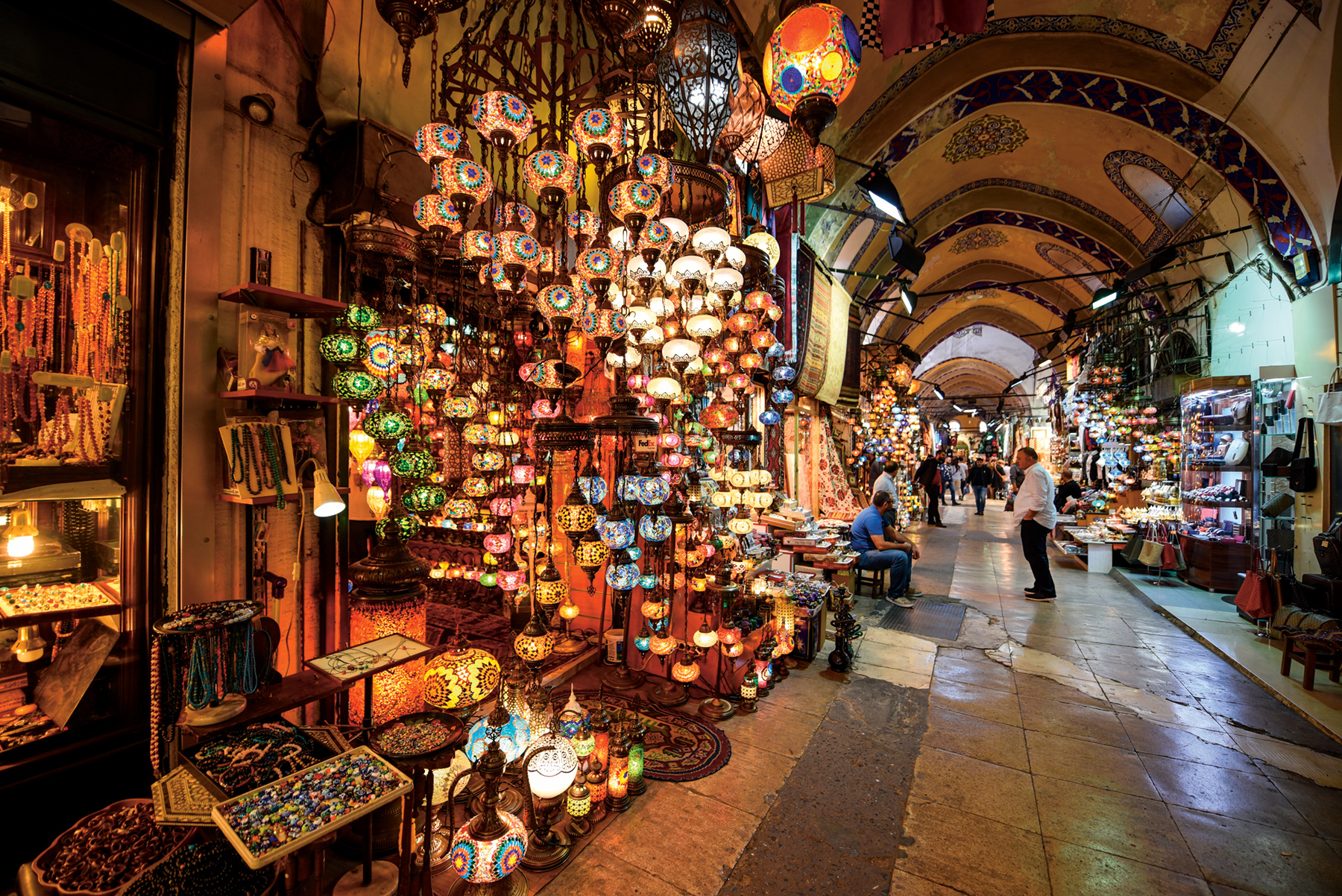 Bountiful wares and exotic trinkets on offer at the Grand Bazaar in Istanbul.

WHERE TO GO
The breathtaking six-minaret Sultan Ahmed Mosque — commonly known as the Blue Mosque for the tens of thousands of Iznik blue tiles adorning its interior — is an impressive example of Byzantine architecture. So is Hagia Sophia, considered in its era the world’s most venerated Greek Orthodox Christian church. It was converted into a mosque in 1453 and is now a museum showcasing Islamic design elements as well as some Christian mosaics.

Dating back to the 15th century, the Grand Bazaar is Turkey’s oldest and largest covered bazaar. Lose yourself in this maze of 4,000-plus shops spread out in a grid pattern. Go with a list to help you focus while browsing the dizzying array of jewellery, leather goods, silver, kilims and lanterns. And be ready to haggle — hard.

If you’re a jazz aficionado, check out the legendary Nardis Jazz Club, which features entertainment every night and hosts musical artists, both local and international, such as singer Polly Gibbons and guitarist Martin Taylor, both from the U.K. And be sure to visit a hammam (Turkish bath). Opt for the swish (and exclusive) “Anatolian Grace Hammam Experience” at Raffles Spa (Raffles Istanbul) or the “Sultan Treatment” at Sanitas Spa (Çıragan Palace Kempinkski), housed in a refurbished Ottoman mansion.

WHERE TO DINE
Turkish cuisine is the mainstay of Istanbul’s restaurant scene, but expect globally diverse dishes, too. Stop in at Feriye Palace, housed in a 19th-century Ottoman building that used to be a police station, to enjoy seasonal seafood and traditional specialties such as manti (meat-filled dumplings), as well as spectacular views of Bosphorous Strait. Worth a trip to the Asian side of the city are Çiya and Çiya Sofrasi. Both are helmed by Musa Dagdeviren, who was recently profiled in season 5 of Chef’s Table on Netflix and who puts his own spin on Anatolian recipes. Go for the pistachio kebab and, for dessert, kabak tatlisi (caramelized pumpkin).

Craving Pan-Asian? Visit Isokyo at Raffles Istanbul to nibble on bao bun sliders with pulled beef ribs and Asian slaw, plus tom yum braised lamb shank with bok choy and Asian mushrooms. Wash it all down with their signature cocktail, Paradigma (vodka, raspberry liqueur, passionfruit, honey nectar, cranberry juice and rosemary). Head over to Sirin Firin Bakery in the Galata district for the Turkish savoury dumpling pogaca with a feta-parsley filling and their French pastries. 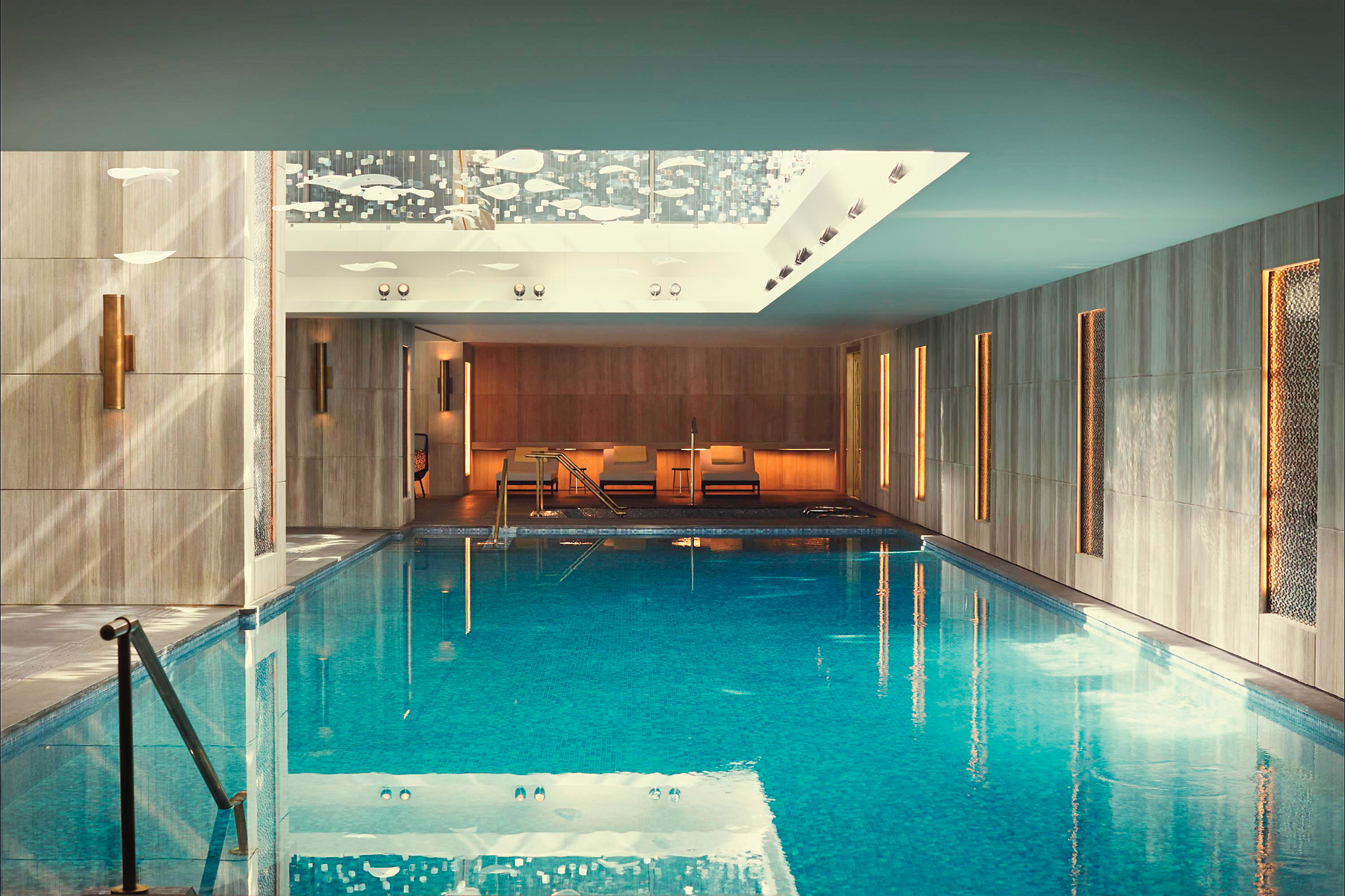 WHERE TO STAY
The modern Raffles Istanbul is an art lover’s paradise with 224 original works on-site. Taking centre stage in the lobby — Dolmabahçe, a hyper-real photo mural of the Dolmabahçe Palace in the city, by New York–based French artist Jean-François Rauzier; and Lavinia,a massive abstract bronze sculpture by Johannesburg-born Martin Dawe, who is based in Atlanta, Georgia.

CAPPADOCIA
Located on a plateau in central Anatolia (Asia Minor) — the peninsula comprising the Asian portion of Turkey — Cappadocia is renowned for its picturesque semi-arid landscape. Natural erosion and ancient volcanic activity generated the mesmerizing rock formations — fairy chimneys, cones, mushrooms and pillars, some of them rising 40 metres (130 feet) high — and the intricate network of subterranean multi-level dwellings dug into the soft volcanic stone were created by humans. View the wondrous landscape in all its glory by going on one of the region’s popular hot air balloon rides. 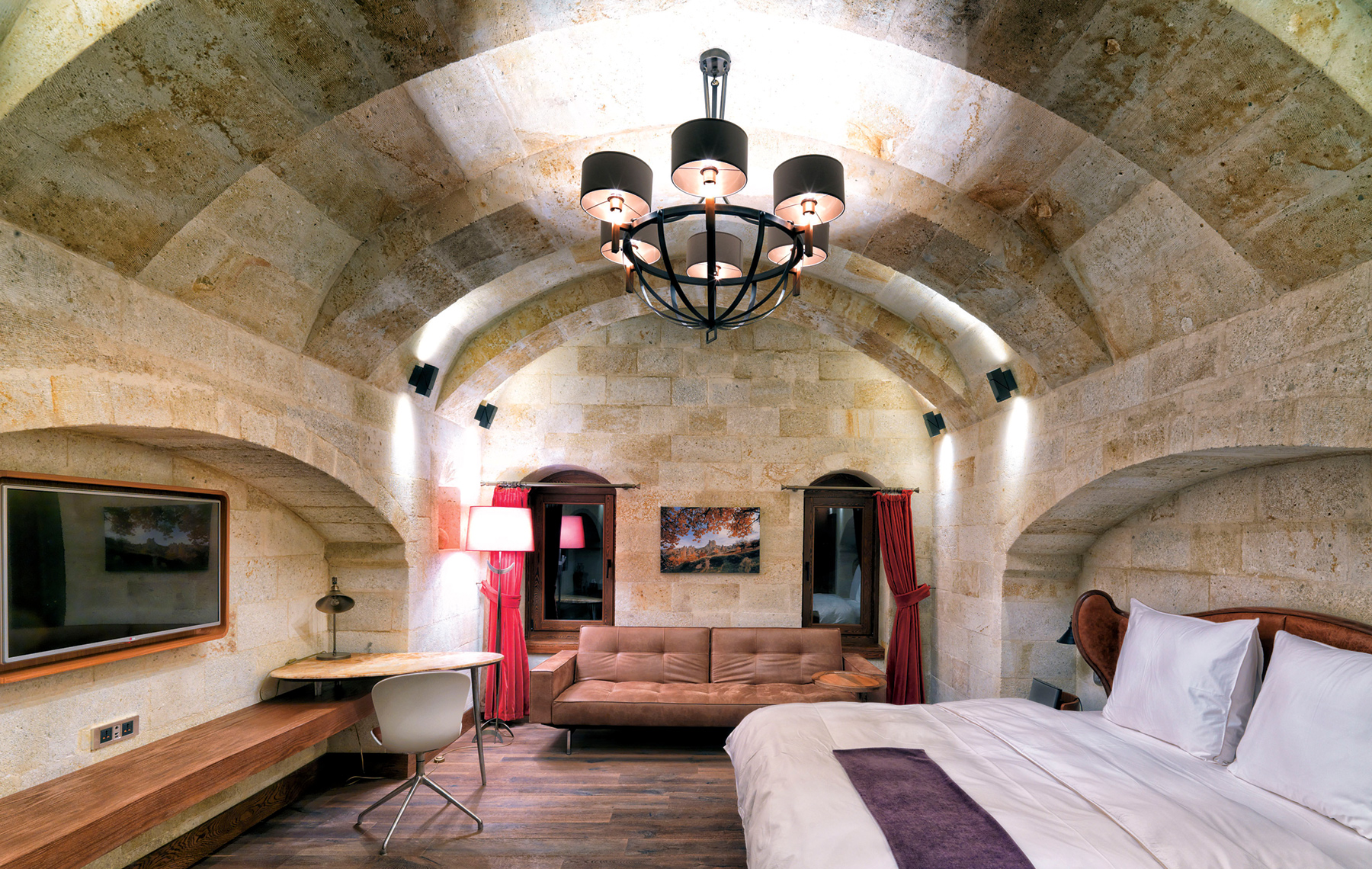 A surprisingly bright, cave-style room at the Ariana Sustainable Luxury Lodge in Cappadocia.

WHERE TO GO
Designated in 1984 as a UNESCO World Heritage Site, Göreme Open-Air Museum is a vast complex of rock-hewn monasteries and churches with elaborate 11th-century frescoes painted by monks. The Kaymakli Underground City is a system of tunnels that provided refuge to the early Christians fleeing Roman persecution. Eight levels deep and arranged around ventilation shafts, it has chambers that served as living quarters, places of worship, stables and storehouses for grain and wine. Those chambers are cramped and passageways are tight, so skip this tour if you’re claustrophobic.

For further exploration, pick one of three valleys, all a short distance from Göreme — Devrent Valley with its lunar landscape of fairy chimneys and animal-shaped rock formations; Ihlara Valley and its deep river-formed canyon with 4,000-plus dwellings and 100 cave churches; and ideal-for-hiking Pigeon Valley, so named for its numerous cliffside dove cotes. Then return below ground for a visit to the elegant Güray Ceramic Museum in the town of Avanos with its private collection of some 500 pottery pieces, ranging from Neolithic Age artifacts to the works of modern-day ceramics artists like Sitki Olçar.

WHERE TO DINE
Head over to the Old Greek House in the village of Mustafapasa, a lovely family-owned restaurant where all the food — such as traditional dolmas (stuffed vine leaves) and eggplant casserole — is prepared by the owner’s wife, Emine Öztürk. At Seki Restaurant, Lounge & Cellar at boutique hotel Argos in Cappadocia, serene views of nearby Pigeon Valley accompany the well-curated menu of Turkish and fusion entrées, plus an extensive wine list that includes shiraz and, from the hotel’s own vineyards, Kalecik Karasi. Leave room for dessert and order the lava cake–style tahini soufflé with sesame, fruit salad and lemon-mint sorbet.

WHERE TO STAY
Check into one of the unique cave hotels in the region. Ariana Sustainable Luxury Lodge atop Uçhisar Valley, which is equipped with solar power and Tesla charging stations, has a restaurant on-site, The Plum, which serves up farm-fresh Mediterranean dishes. Guest suites range from converted ancient cave dwellings to chic duplex suites. Argos in Cappadocia was built with local stone from the province of Nevçehir and features historic underground cellars, caves, a chapel and a 1,500-year-old monastery (now a wedding and concert venue), as well as two vineyards and a vegetable and flower garden.

BODRUM
This formerly humble fishing village on Turkey’s southern Aegean coast has become a beachside destination for celebrities and the well-to-do, who dock their mega-yachts at Yalikavak, the swankiest of the three marinas in town. Not surprisingly, designer shops, restaurants and art galleries have sprung up here, even an aqua park. 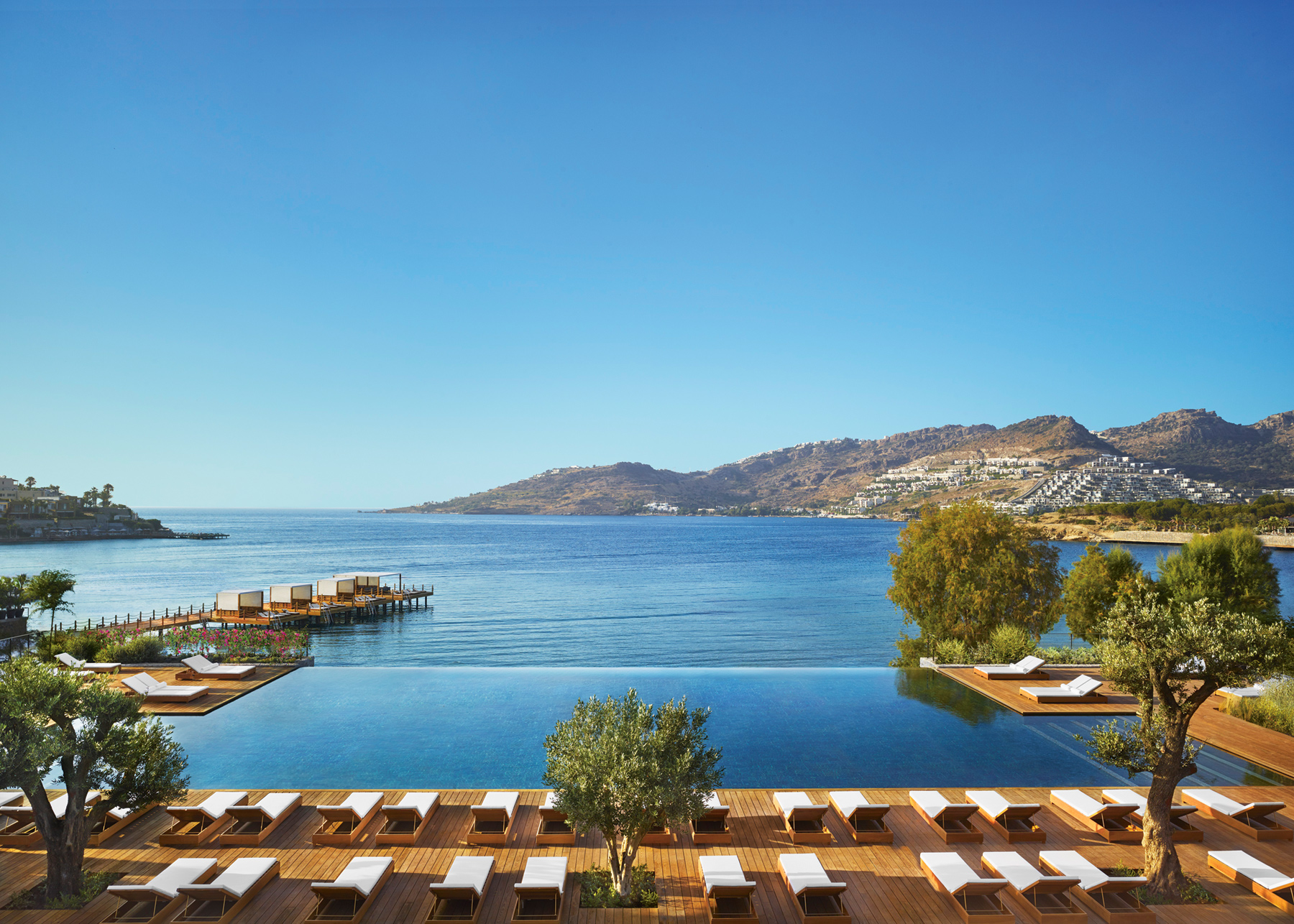 The elegant Bodrum EDITION hotel, sits on the western point of the Bodrum Peninsula on the Aegean Sea.

WHERE TO GO
Get your beach time (or just celeb-watch) in Göltürkbükü (a combination of the names of the adjoining towns Gölköy and Türkbükü) — considered Turkey’s St. Tropez, with its secluded bay, five-star hotels and posh restaurants. Or sun yourself on the sandy shores of Bitez Beach, where the tame waves are ideal for beginner surfers. If you’re more adventurous, snorkel off the coast in the Aegean Sea or go on a day trip to the Greek island of Kos, just a 45-minute boat ride away to explore Greek and Roman ruins.The Bodrum Museum of Underwater Archaeology (the largest in Europe) and the medieval Castle of St. Peter are currently closed for renovations and slated to reopen this summer. In the meantime, visit the Bodrum Maritime Museum to view model gulets (traditional Turkish sailboats) and an extensive collection of seashells from all over the world. And don’t leave Bodrum without snapping up handmade sandals at Güney Sandalet in Türkkuyusu or at Ali Güven Sandalet in the Old Town, and perhaps a bottle of perfume made from Bodrum’s famous clementines.

WHERE TO DINE
Proximity to the sea makes for wonderful dining and in Gümüslük, you’ll have no trouble finding a plethora of amazing seafood restaurants with gorgeous sunset views. Then drop by the boho-inspired Limon Café for an exotic-flavoured ice cream. Tired of seafood? Visit Nusr-Et steakhouse for their signature burger or perhaps a Kobe steak.

WHERE TO STAY
At Bodrum EDITION, where modern décor prevails — white-washed wood, marble floors and bentwood chairs — staff will ferry you in buggies to and from your room, whether it’s for breakfast, the pool, the hotel’s private beach or the spa, with its 14 treatment rooms. The hotel’s drinks menu proffers trendy pick-me-ups, such as the Boost Shot (red pepper, lemon juice and ginger), plus an array of healthy smoothies. Dine at the hotel’s restaurant, Brava, headed by Peruvian-born Diego Muñoz. The cuisine of Muñoz — an alumnus of the famous Michelin-starred El Bulli in Catalonia — takes its flavour cues from Turkey and the Mediterranean. 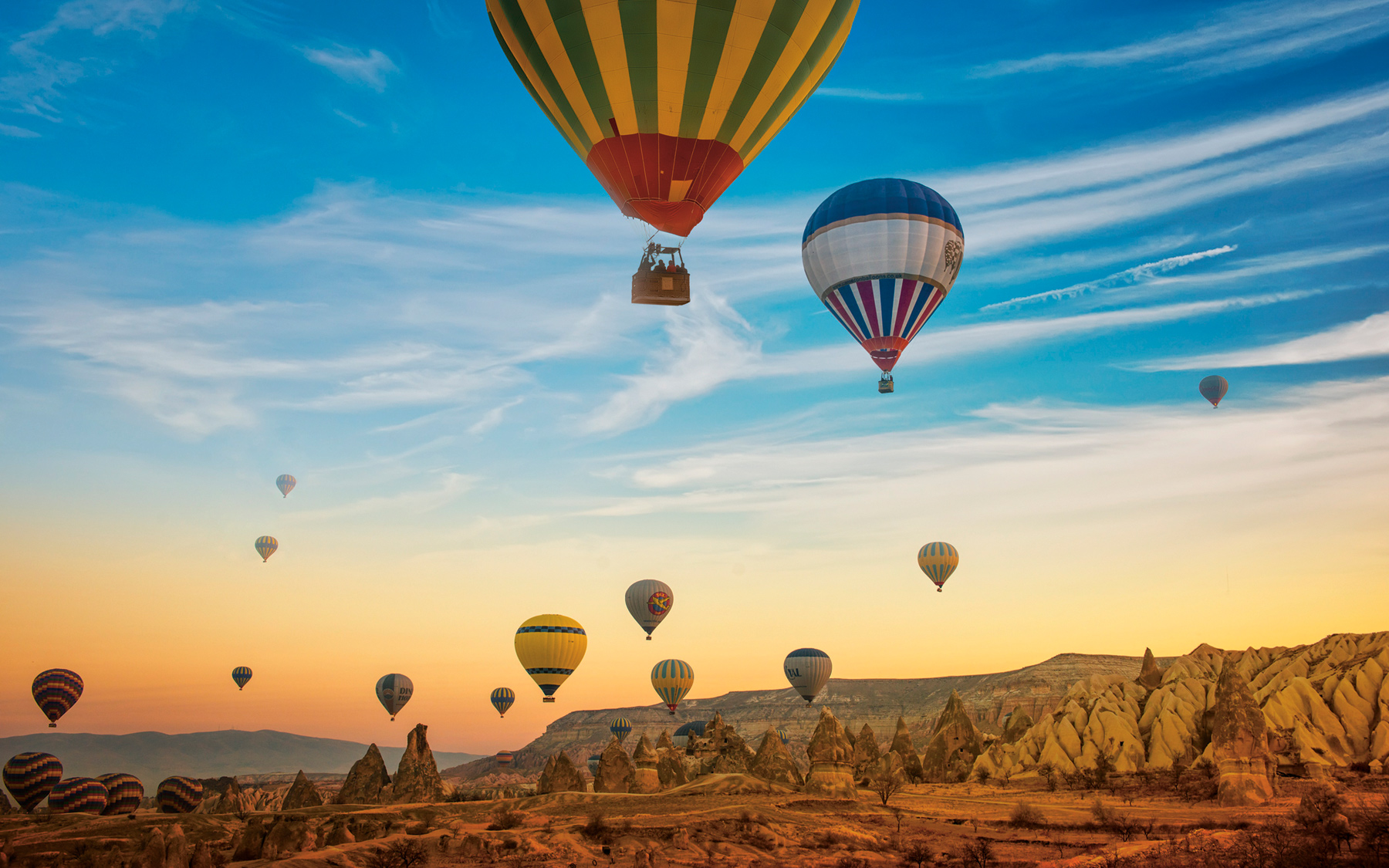 No visit to Turkey is complete without viewing Cappadocia's natural wonders from the vantage point of up to 8,000 feet above ground.

SMART TRAVEL
When you visit Turkey, opt for knowledgeable and reputable travel operators, such as Sea Song (Istanbul, Bodrum) and Travel Atelier (Cappadocia). It can make the difference between a trip with wonderful memories — and a few history lessons thrown in — and being lost for hours in the blazing sun. “We don’t want our guests to worry about anything. We ask a lot of questions before they arrive, even personal ones like physical fitness and health,” says Y. Murat Özgüç, co-founder and co-partner of Travel Atelier. “When touring a landscape like Turkey, it’s our job to safely guide you, whether it’s to the top of Galata Tower [or] through Cappadocia’s many narrow underground cities or to an off-the-beaten-track restaurant. We tailor-make your trip, so you don’t make [any] wrong decisions.” travelatelier.com, seasong.com

By Tracey Ho Lung –  *This article originally appeared in INSIGHT: The Art of Living | Spring 2019