The power of a sculpture on the viewer is markedly different than that of wall art. While paintings, photographs and tapestries tell a story or, in the case of non-representational art, which conveys a mood, three-dimensional works are often seen as having special attributes that elicit, arguably, more powerful responses.

Historically, many large-scale 3-D artworks were totemic objects that provided protection to whoever commissioned them. Effigies — in ancient times, stand-ins for people who have passed away and their possessions — were created to ease the passage into the afterlife. Nowadays, as proxies for unpopular political figures, they’re burned to show public disapproval. Smaller art pieces were more personalized, crafted to bring good fortune to their owners after, say, a birth or a marriage. Later, statues were carved to elevate the status of sovereigns. 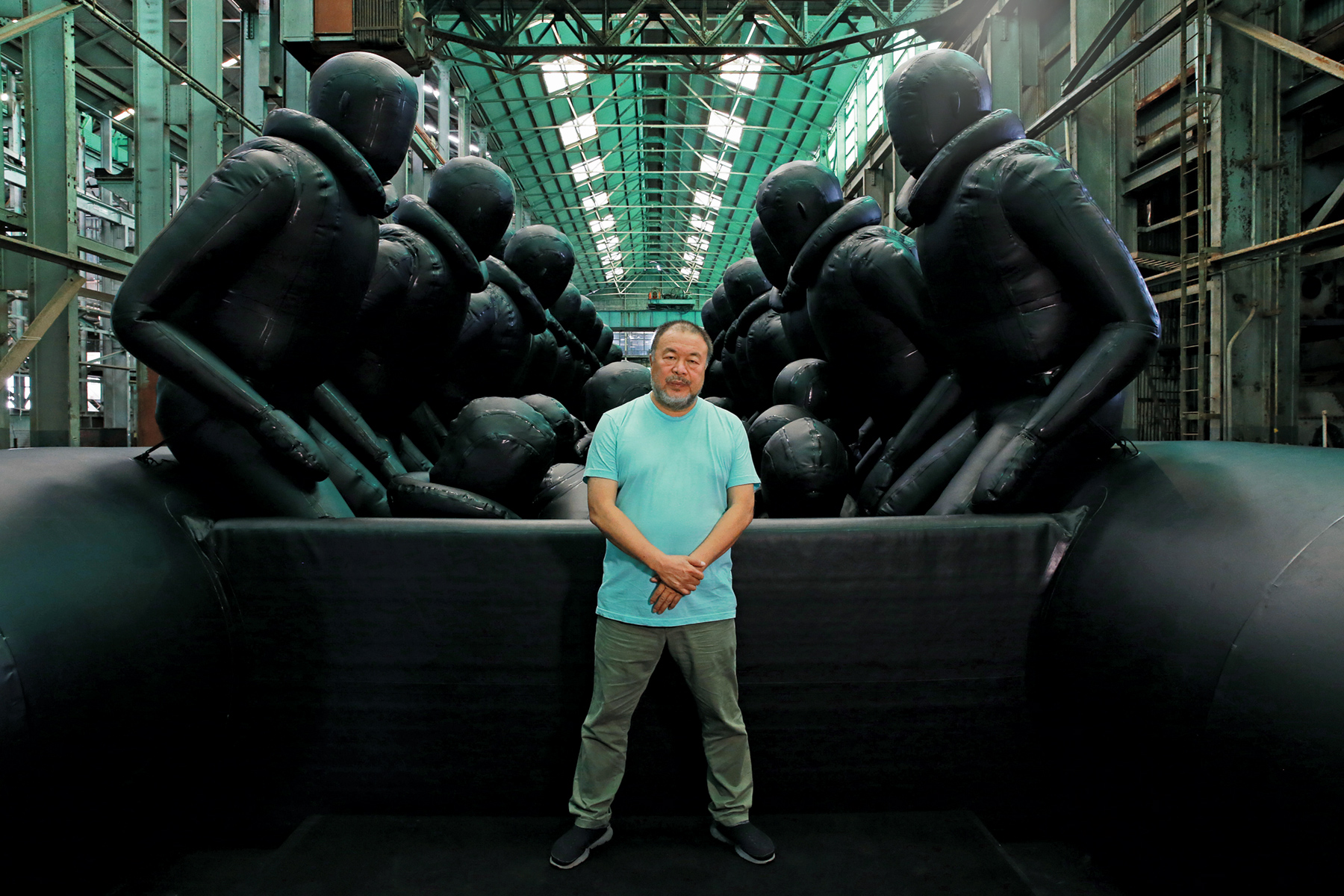 Law of the Journey, by Ai Weiwei

In our more recent times, Henry Moore, Louise Bourgeois, Ai Weiwei and other unconventional sculptors have redefined the art form by using non-traditional materials, abstract shapes and more diversity in their artistic messages. But because a sculpture must stand on its own feet, literally, the viewer is forced, albeit pleasantly, to interact instead of merely observing, which results in an extremely personal, powerful viewing experience.

This past June, Sotheby’s held an auction in Hong Kong, titled “Curated: Turn it Up,” which highlighted several artists, including Yayoi Kusama, Jeff Koons and Brian Donnelly, aka KAWS. The auction was specifically aimed at young buyers, who approach at-home curation in a different light, including Donnelly, who is a collector himself.

Investing in large-scale sculpture requires a combination of factors, the first and foremost being space. Three-dimensional art requires not just an area defined by its footprint, but also room for the viewer to move around it, which is why the common thinking is that large-scale and site-specific work can be displayed only in museums, galleries and public spaces. 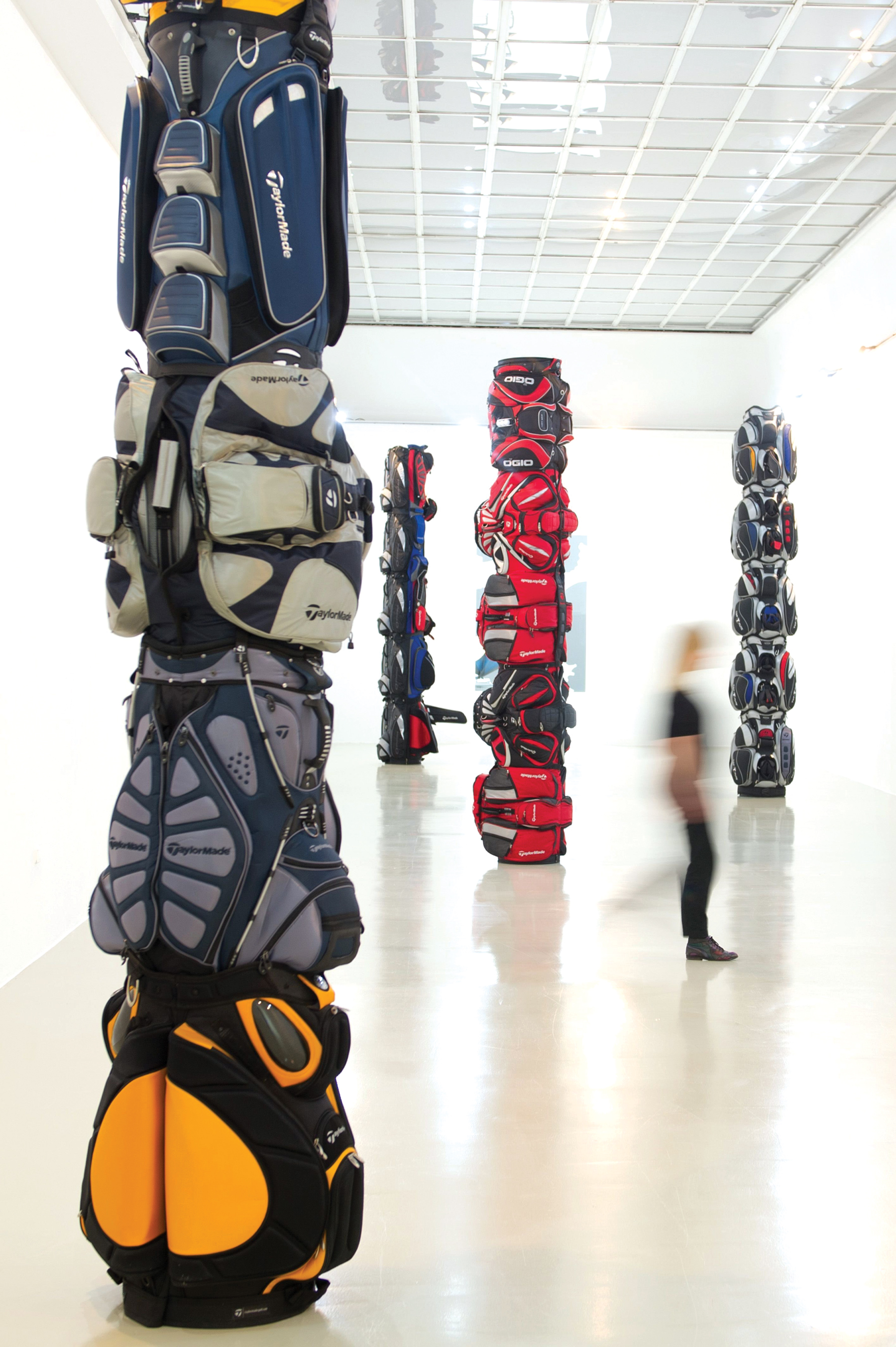 Make sure you have enough space in your home to move your objets around. And while diffused daylight is best for illuminating 3-D works, consider also the materials your sculpture is made of, as too much sunlight and too many temperature fluctuations can damage it. Meanwhile, here’s a smart trick from museum curators on how to protect art. Rotate the pieces to different areas in your home or put it in storage for a spell. A good auction house such as Sotheby’s can provide proper storage facilities (you’re in luck if you’re in the U.K., where Sotheby’s maintains a large fine-arts storage facility) or will recommend a safe place to store your art.

“A home [provides] a great context for presenting art,” says Micah Lexier, a Canadian artist who combines conceptual art with sculpture. “It’s one thing to visit a museum, but the real experience of art is when one spends time with something they have chosen to live with.” In his own home, Lexier is surrounded by his own creations, as well as many other pieces he has collected, including works by Kelly Mark, Ken Nicol, Vanessa Maltese and Tessar Lo.

Even the most recognizable sculptors, like Anish Kapoor and Rachel Whiteread, who are best known for public installations, create smaller pieces that can be displayed to advantage in a private residence. And if space is limited, displaying a few excellent works make a big statement.

In 2014, 20th-century artists Alberto Giacometti and Amedeo Modigliani broke auction records when Sotheby’s sold Giacometti’s Le Chat for US$101 million and Modigliani’s Nu Couché for US$70.7 million, respectively. But the equally moving and accomplished works by their mentors and contemporaries, such as Maurice Sarkissoff and Hugo Weber, can be found at more accessible prices. 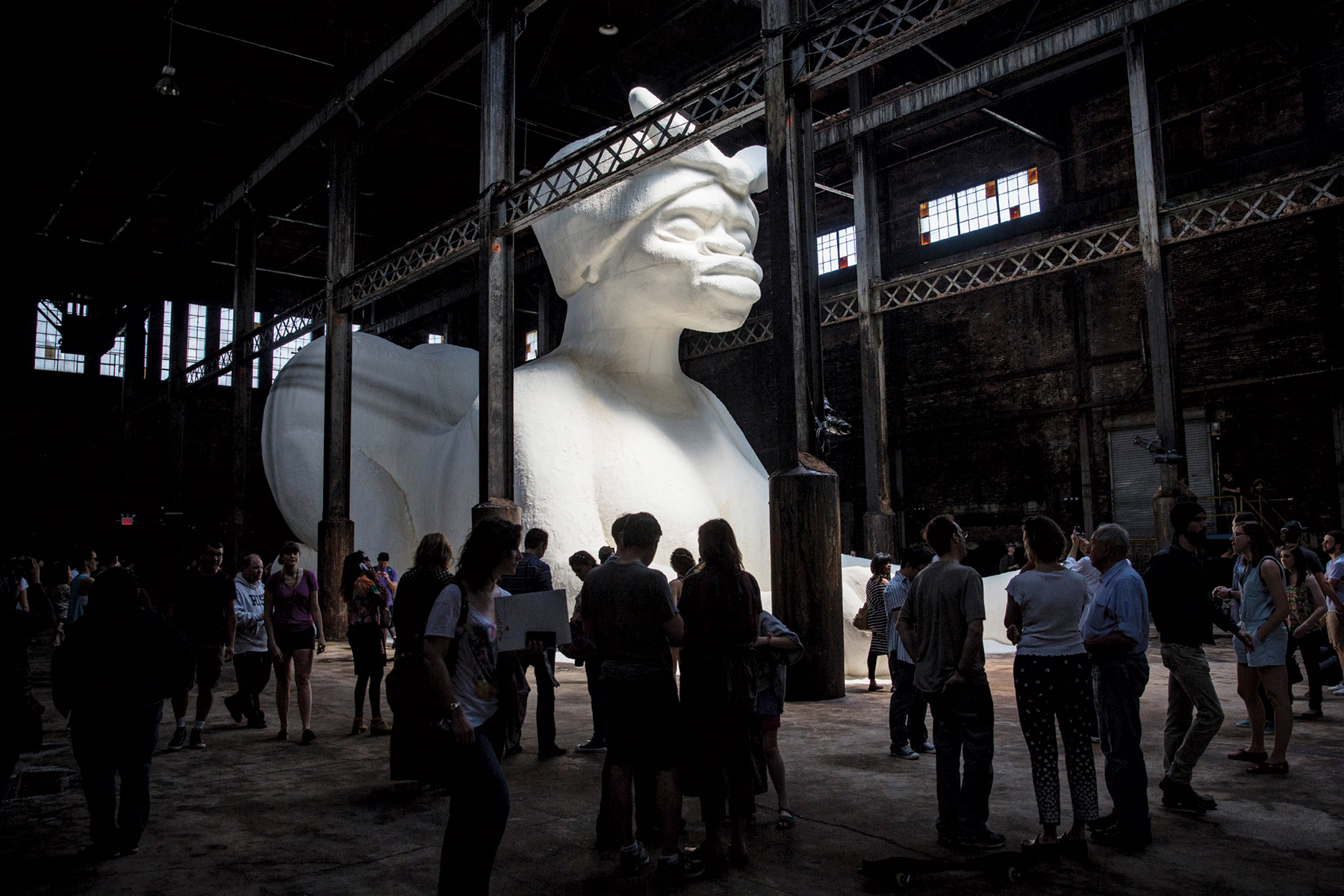 A Subtlety, or The Marvellous Sugar Baby, by Kara Walker

Take the time to educate yourself in order to understand the genres and movements of how visual art evolved over the generations, so you can provide context when you bring an artwork into your home. “Context is everything,” notes Lexier. “I’m very interested in the relationship between an object and its context. Sometimes that means the other objects around it, but it can also mean the physical space in which that object is presented.” For example, the works of conceptual artists Kiki Smith, Jeff Koons and Jenny Holzer typically comment on gender, politics and pop culture, and so, when and where you position their art in your home adds another piece to their narrative.

Nowadays, contemporary sculpture is perhaps the most exciting genre for collectors. Visual artists such as Kara Walker, Brian Junger and Shary Boyle all work in striking, non-traditional mediums. Take Walker’s 75-foot-long, 35-foot- tall sculpture, A Subtlety, made of polystyrene and sugar; Junger, who often works with repurposed objects, like running shoes and car fenders; and Boyle, known for her fantastical ceramics and installations. What’s more noteworthy, however, is that these artists are celebrated for focusing on identity, social injustice and appropriation.

Lexier himself is a champion of emerging artists. “Some of my favourites are works that
I have bought from artists very early in their careers. This goes back to the instinct thing. I have always trusted my gut when it comes to art, and nothing pleases me more than support- ing [artists] early in their careers. I almost prefer [that], as I feel I am responding to the artwork and not the reputation of the artist.”

Collectors are also rediscovering objets created by older artists outside the canon — works by women as well as by artists of non-European and Indigenous descent. Some of major exhibitions at the Art Gallery of Ontario have featured Georgia O’Keeffe and Yayoi Kusama. The small sculptures by 62-year-old artist Kerry James Marshall were on exhibit at the Rennie Museum in Vancouver until November 2018. This past May, his 1997 painting, Past Times, became the most highly valued work by any living black artist, selling at Sotheby’s for US$21.1 million (the buyer was rapper Sean Combs, aka P. Diddy). 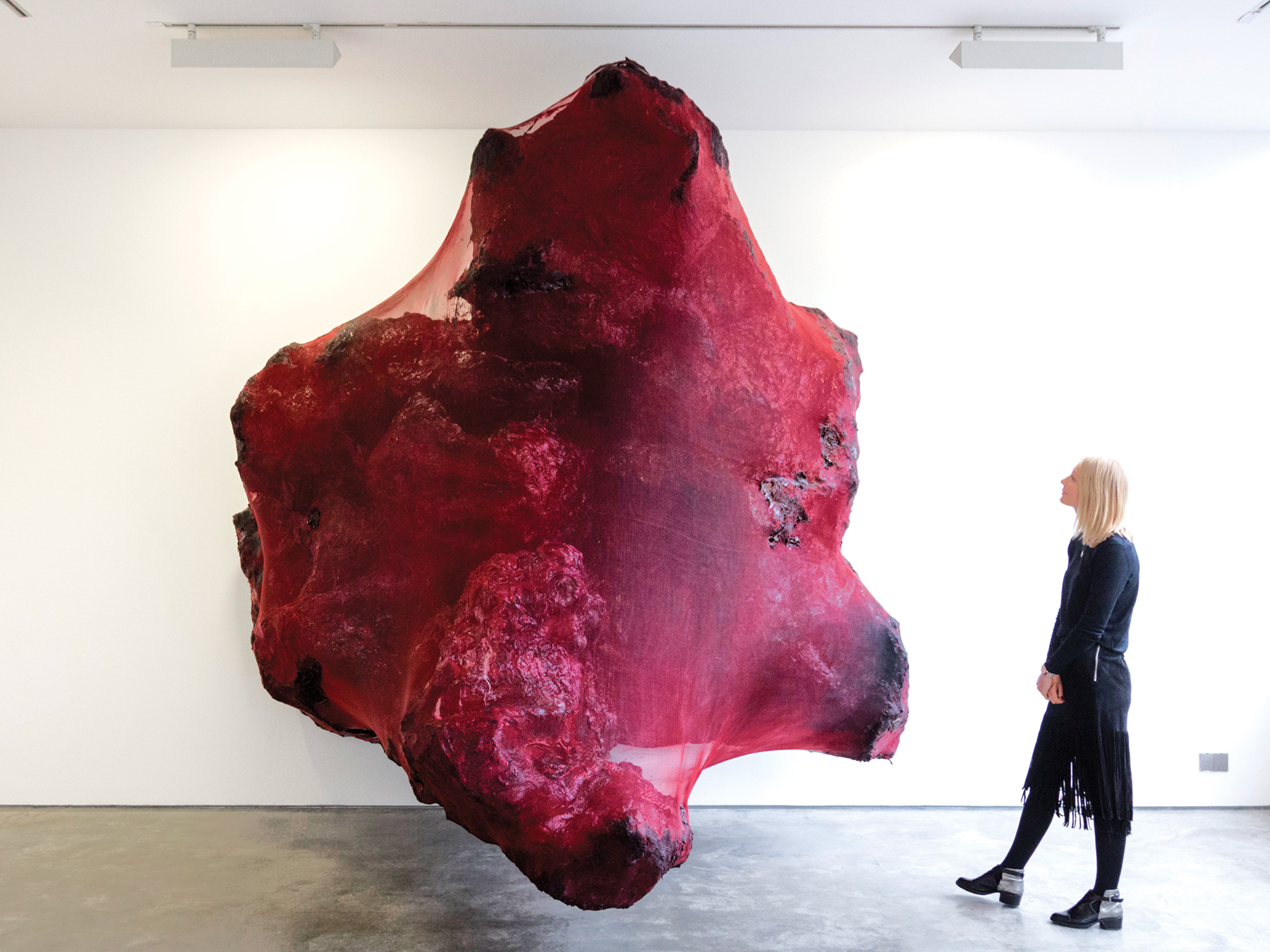 Red Images- in the Red, 2016 Anish Kapoor on view at Lisson Gallery in London, UK

“My advice when it comes to art is always the same,” says Lexier. “You have to love what you are buying; [otherwise], you should not buy it.”

He also urges would-be collectors to go to art shows and auction previews to meet and mingle with artists and other collectors. “You might meet the artist and get along well, and this might be your entry point into the work.

“Other times, the artist might have nothing to do with it. You could see an artwork and be drawn to it without knowing why. Trust your instincts — in life and in art. It’s cliché advice, but I stand behind it.”

By Rhonda Riche –  *This article originally appeared in INSIGHT: The Art of Living | Winter 2018