In With The Old: Canada’s landmark hotels and resorts

Offering elegance alongside a familiar welcoming ambience, Canada’s landmark hotels and resorts are poised to host us once more.

When Ernest Hemingway rolled into Paris with the Allied forces retaking France in 1944, the first place the swaggering war correspondent set out to “liberate” personally was the Hôtel Ritz, a favourite haunt of his going back to the 1920s. Upon arriving at the legendary Place Vendôme retreat, however, he was told that the Germans had long since departed — and also that he couldn’t bring the firearm he was carrying onto the premises. Nonplussed, he reportedly returned the weapon to his Jeep and made for the bar inside, where he famously racked up a tab for dozens of dry martinis.

Hemingway’s excesses aside, his desire to restake his claim to a treasured hotel after a lengthy absence is one that many of us can relate to right now. As much of the world emerges, in fits and starts, from a year or so of forced hibernation, the march through an echoing lobby to an oversized suite offering 24-hour room service sounds pretty good. To be sure, the trendy and new will always have their place, but it’s hotels combining luxury, familiarity and a comforting sense of permanence that are likely to resonate with the widest swath of travellers over the next while. Canada has a wealth of such old-school charmers within its borders, from urban grande dames, such as the Ritz-Carlton Montreal and Fairmont Hotel Vancouver, to coastal and mountain resorts as gorgeous as their natural settings.

Even committed scenemakers are ready to check in. 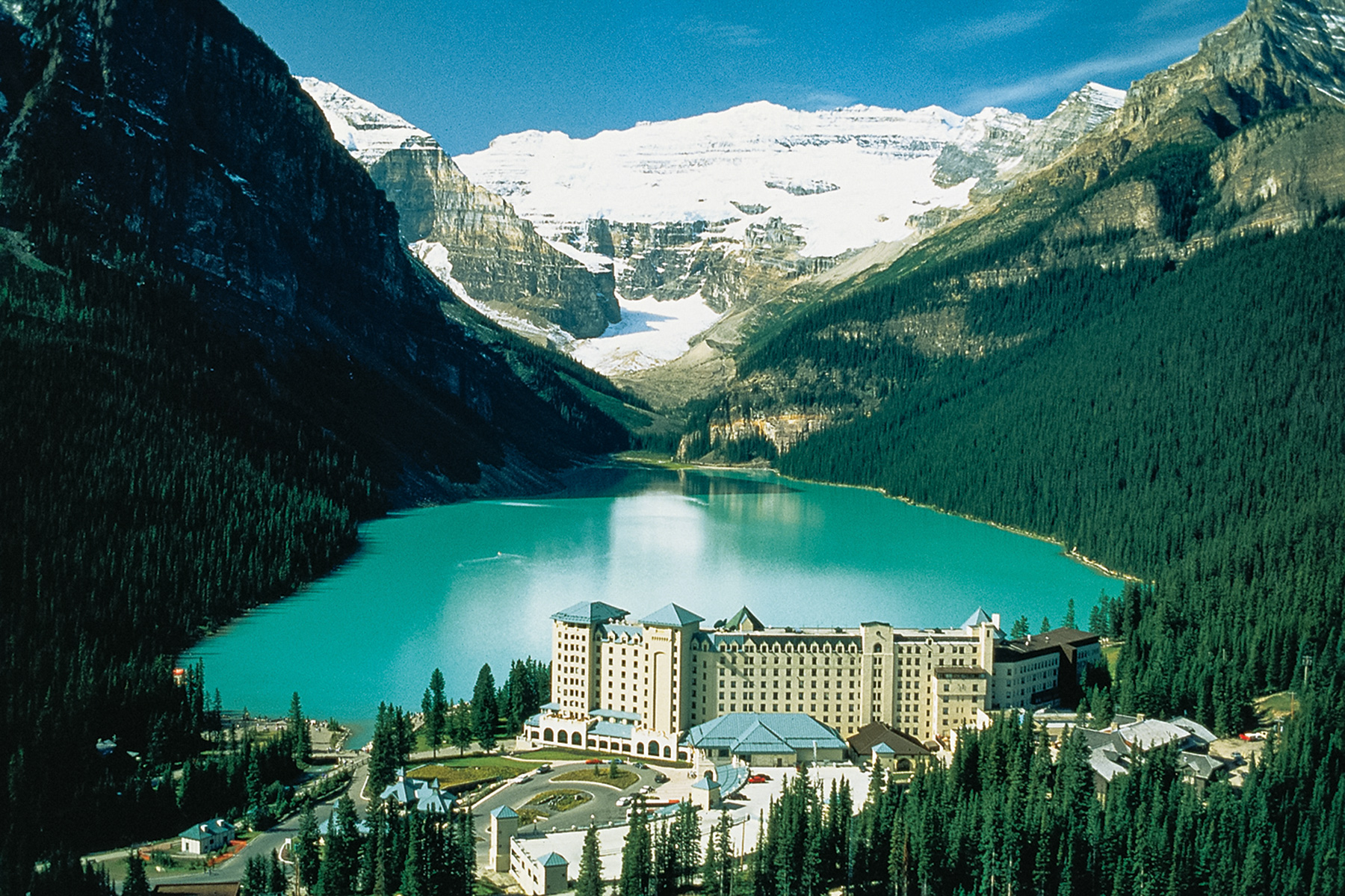 “I love Fairmont Chateau Lake Louise in Alberta,” says Allen Chan, a co-founder of DesignAgency, a Toronto-based design studio internationally renowned for its ultra-contemporary hospitality spaces. “You just cannot beat its location, the view of the lake, its breathtaking surroundings. When I get back there, what I look forward to doing most is some real skiing. I’ve been stuck here in Southern Ontario for too long!”

Pamela Mullinger in the East Coast can relate. When the media exec in New Brunswick and her British-born husband, Ian, need a break from running the acclaimed magazine EDIT, they bundle their young family off to The Algonquin Resort, a sprawling 132-year-old pleasure palace in the picturesque town of St. Andrews-by-the-Sea. Among the Algonquin’s draws are a full-service day spa, an 18-hole golf course with panoramic views of the surrounding seascape, and an indoor pool replete with outdoor water slide accessible via an ornate spiral staircase.

“We love the Algonquin as a family getaway as much as we do taking our office team there for Christmas celebrations,” says Mullinger, who helped launch the award-winning Monocle magazine brand in London before returning to Canada seven years ago. “I grew up in New Brunswick and have been familiar with the resort since I was a child. When friends visit from England, we make it a point to go and stay there.” 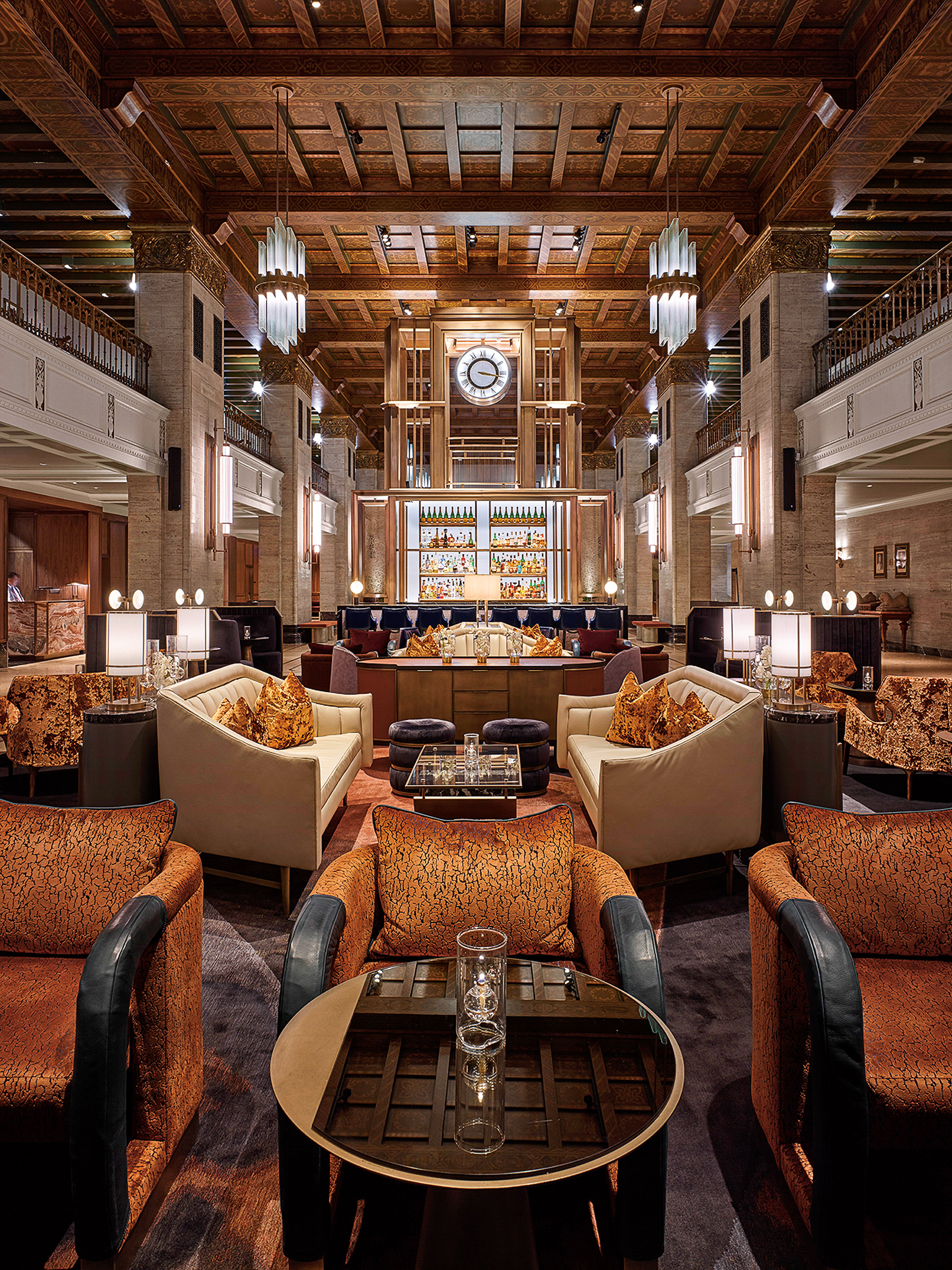 Of course, nostalgia alone doesn’t account for repeat visits. Many of Canada’s best heritage properties go to great pains to remain fresh, alluring and modern. In the case of the Algonquin, an extensive two-year renovation completed in 2014 — when it became the first Canadian hotel to be included in Marriott’s Autograph Collection of independent upscale properties — resulted in a major overhaul of its 233 rooms and suites. At the same time, the resort’s new executive chef, James May, is doing “a fabulous job” in the kitchen, Mullinger points out.

Meanwhile, Fairmont Le Château Montebello — the rustic-style resort in the Outaouais region in western Quebec, often described as the biggest log cabin in the world — hasn’t rested on its laurels either. To mark its 90th birthday in 2020, this landmark all-seasons retreat, which was, until 1970, a private club for the international rich and famous (among its members were Lester Pearson, Princess Grace of Monaco and Queen Juliana of the Netherlands), undertook a $17.5-million refurbishment of its guestrooms and lobby. All of the updated rooms plus 14 new suites were unveiled last year, while renovations to the public areas will continue post-pandemic. A new wilderness-inspired kids’ playground — one of the many outdoor amenities across 120-plus hectares of old-growth forest, hiking paths and ski trails — also opened in June this year.

“As we reclaim our social lives, the isolation that individuals collectively experienced has created a real desire to reconnect to our most grounding factors — community and a strong sense of place and time,” notes Jennifer Séguin, director of marketing at Fairmont Royal York. 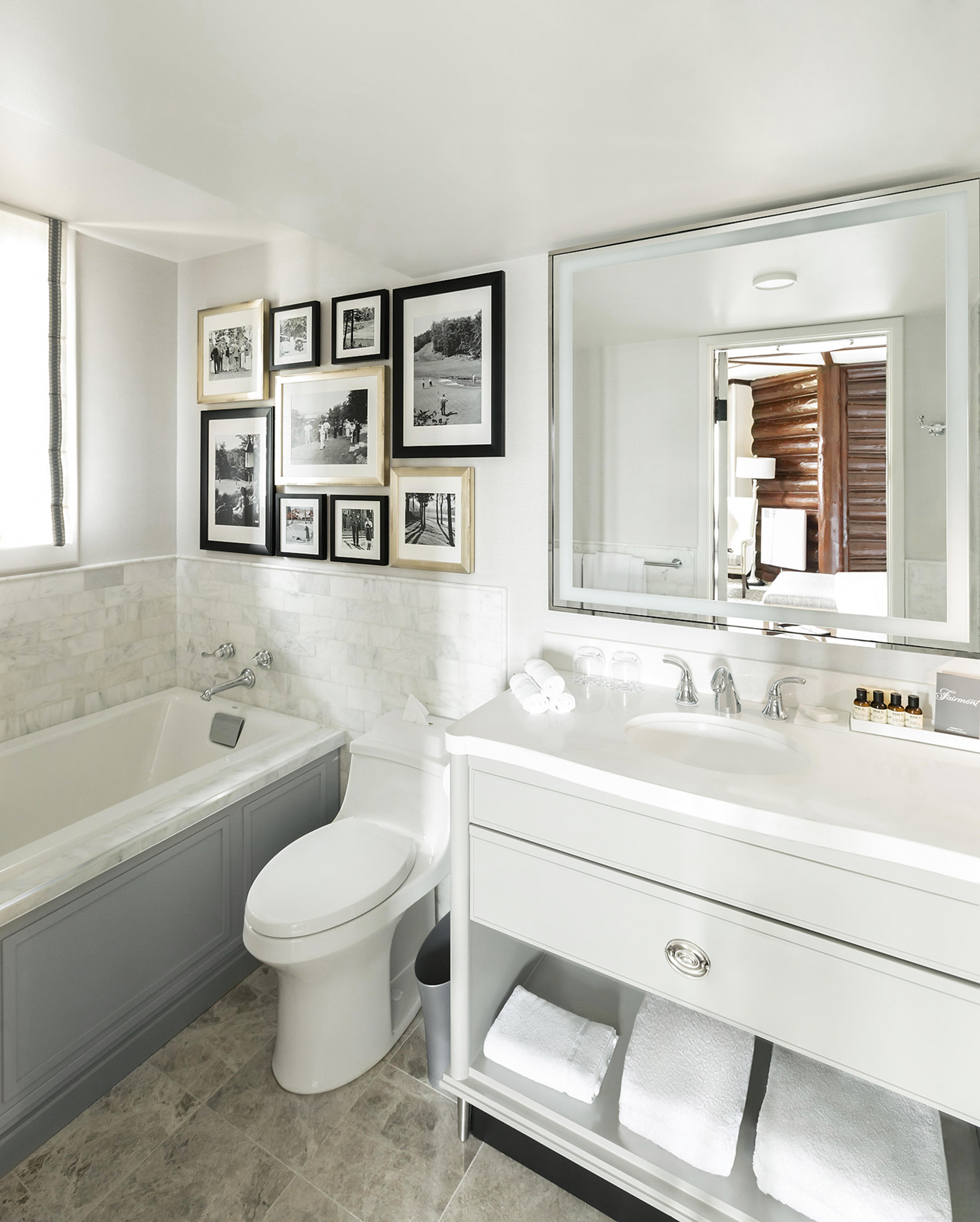 In the past, when Canada hosted international events, it had often done so in its landmark hotels. The first G7 Summit on Canadian soil, for instance, took place at Le Château Montebello in 1981, and two subsequent gatherings, in 2010 and 2018, were held respectively at Deerhurst Resort in Huntsville, Ont., and at Fairmont Le Manoir Richelieu in La Malbaie, Quebec. Now, it’s Canadians themselves who’ll be flocking to their own resorts’ elegant lobbies, sumptuous suites and breathtaking natural settings, says Séguin. 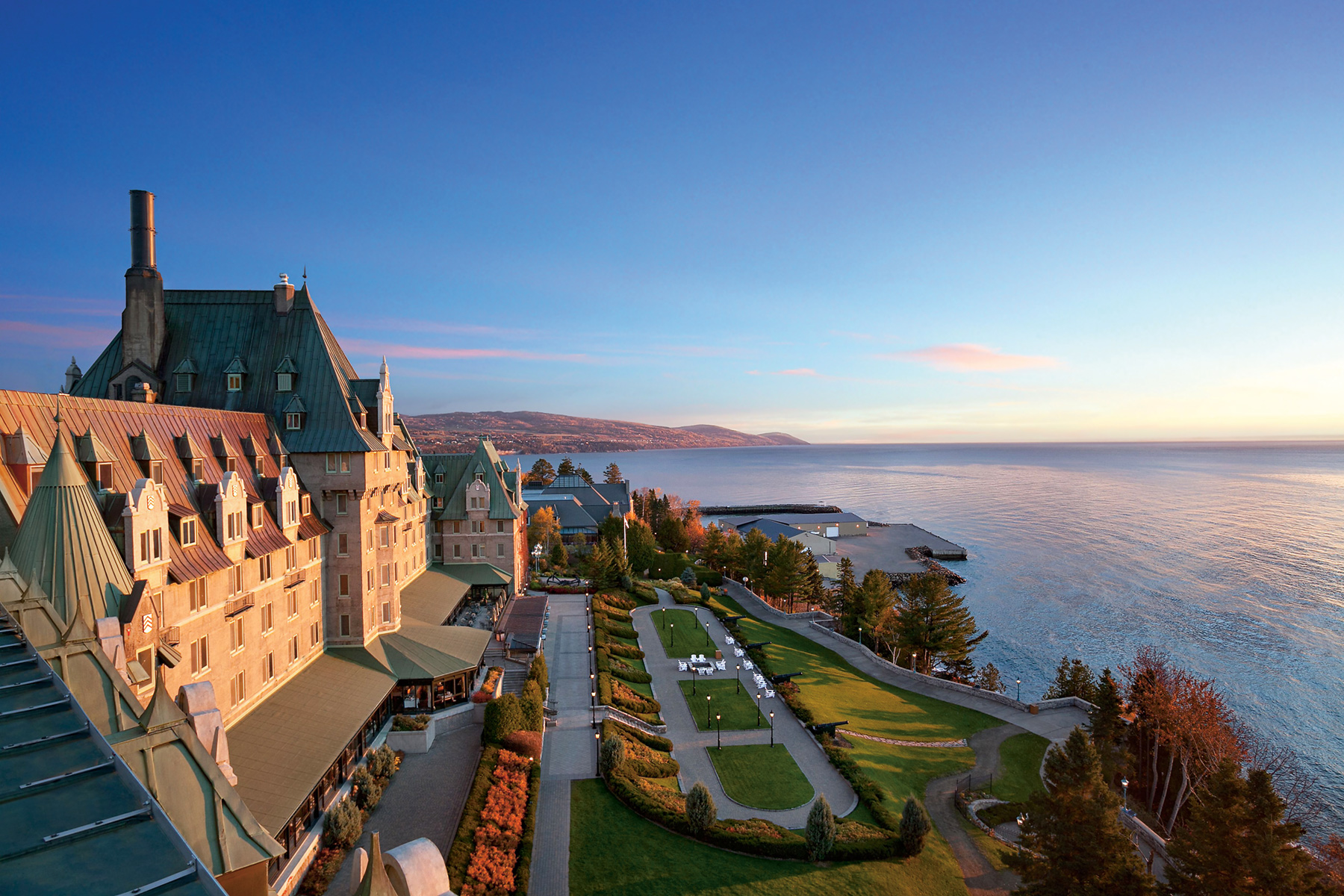 Personally, I’m here for it. I plan on hitting Fairmont Royal York Toronto’s spectacular new lobby bar, inaugurated only a few months before Covid-19 took hold, as frequently as I can. Anchored by a soaring double-height clock tower, the retro-chic spot, called Clockwork, was reimagined by New York City-based Rockwell Group as an ode to rail travel past (transit hub Union Station is across the street) and features Pullman-car-style banquettes.

While I won’t be ordering dozens of dry martinis à la Hemingway, I will raise a glass (or two) to the undisputed queen of Toronto hotels. And I’ll be thankful, as I have been in the past, that it’s in my hometown

By Danny Sinopoli –  *This article originally appeared in INSIGHT: The Art of Living | Fall 2021.

Niagara Falls Into Place: Continues to evolve into a cultural hot spot