To car aficionados, Michael Mauer is more prolific than any architect. Millions of examples of his work are on display all over the world. You might even be lucky enough to have one in your garage. His hobby of drawing cars in his youth eventually led Mauer to do it professionally in 1986 — and for some major international automakers.

At 56 years old, Mauer is now at the very top of his rarified field, currently leading the design department at Porsche as well as at parent company Volkswagen Group, the world’s largest auto manufacturer. It’s a coveted position that has placed Mauer on the frontlines of today’s electric revolution. 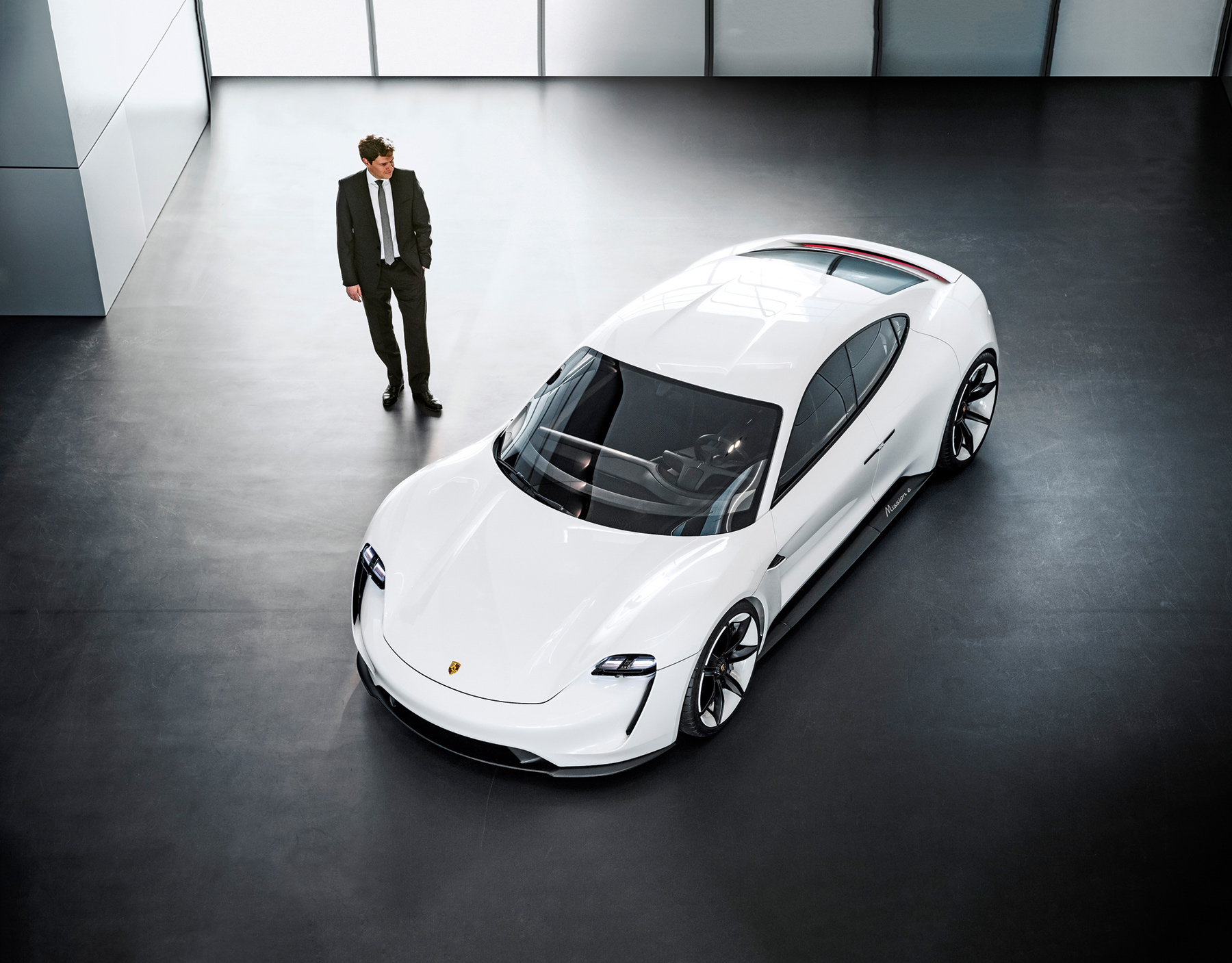 This all-electric sedan with all-wheel-drive, is based on the company's Missions E concept.

“For me as a young designer, we never thought about different types of engines — ever. Electric cars were not on the map,” he says from his office in Stuttgart, Germany.

During the first 100 years of the automobile, the way to go faster was to burn more gasoline. Performance and sustainability were largely at odds. Now, Porsche is aiming to marry these two opposing demands. 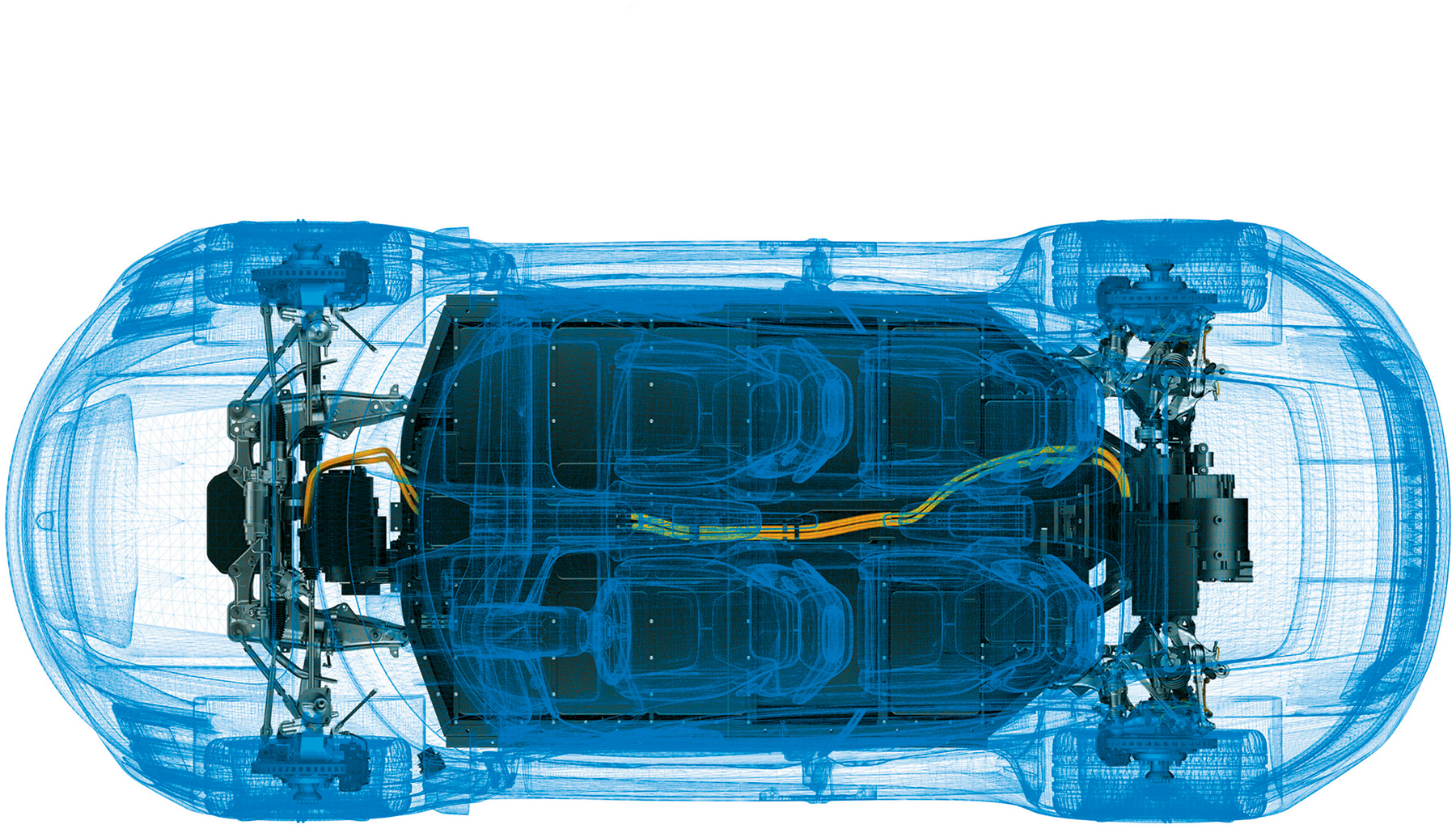 A view of the Taycan's sleek electric drivetrain. 2 electric motors will offer 600 horsepower

The fabled sports-car maker is set to launch its first purely electric vehicle (EV) later this year. Details of the Taycan, formerly known as the Mission E concept, are being kept largely under wraps, but it’s been said that the Taycan is something between a lightning bolt and a limousine. It will have more than 600 horsepower, propelling the four-door car from 0 to 100 km/h in under 3.5 seconds and on to 200 km/h in less than twelve eye-popping seconds. Driving range will be roughly 500 kilometres, but if you do run out of juice, recharging for four minutes will get you 100 kilometres of range.

The company dubs the Taycan as “the first electric sports car with the soul of a Porsche” — except nobody knows if that’s possible. No automaker has managed to fully translate the visceral thrill of a great sports car from the gasoline era into the electric one, not even Tesla. If you’ve ever driven Porsche’s iconic 911, you’ll understand. From the moment you sit behind the wheel, a lumpy thrum coming from the flat-six engine slung behind the rear wheels, the controls — steering, throttle, brakes — all feel more real, more connected than in other cars. Mid-corner with lateral G-force pushing you against the side of the seat, a 911 feels almost hard-wired into your brain. 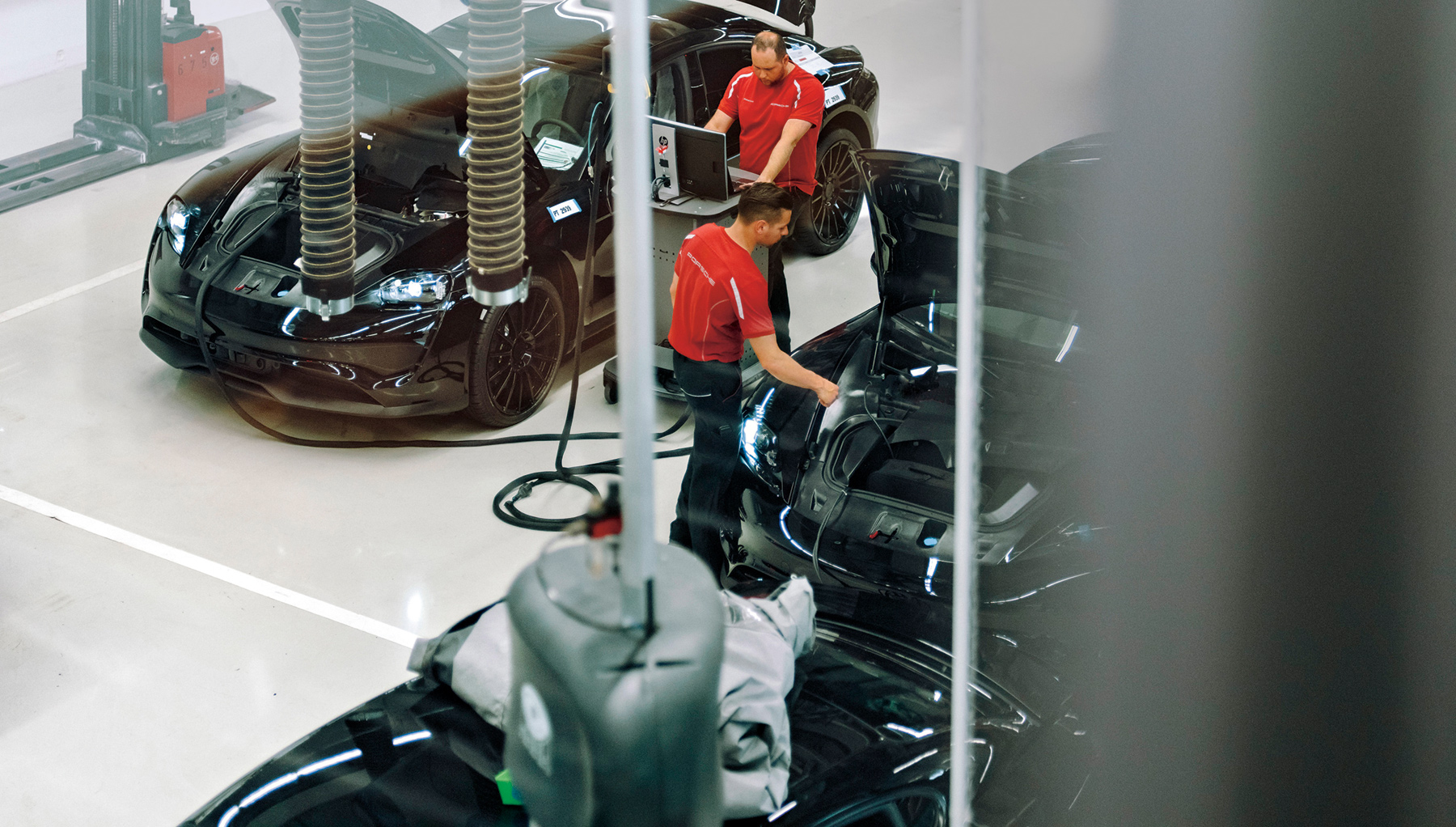 The difficult job of designing an electric car that looks and feels like a Porsche falls to Mauer and his team. “No matter which engine is in the car, you should first recognize it is a Porsche,” he says. “The Taycan has all these typical brand-identity design cues.” He notes the familiar topography of low front hood and raised headlights, strong shoulder line over the rear wheel, and a roof that slopes down into the rear bumper.

EVs present new possibilities for designers. “Engine, exhaust, the gearbox — these massive blocks of steel or aluminum defined pretty much the technical package of a car,” explains Mauer. “On an electric vehicle, those components either don’t exist (exhaust, multi-speed gearbox) or are much smaller (electric motors). “Designers [have] more freedom to use this space for designing a new type of car.” Cars could be smaller but with more space for people and cargo.

Mauer is among the handful of people who have driven the Taycan prototypes. “It took me some time to get used to it,” he notes. “I was missing the [engine] sound that gives an impression of how fast I’m going.” Driving over the Swiss Alps without that sound was something he never imagined he would like. “[But] I fell in love with this combination,” Mauer admits. “You’re always going too fast in this car!” 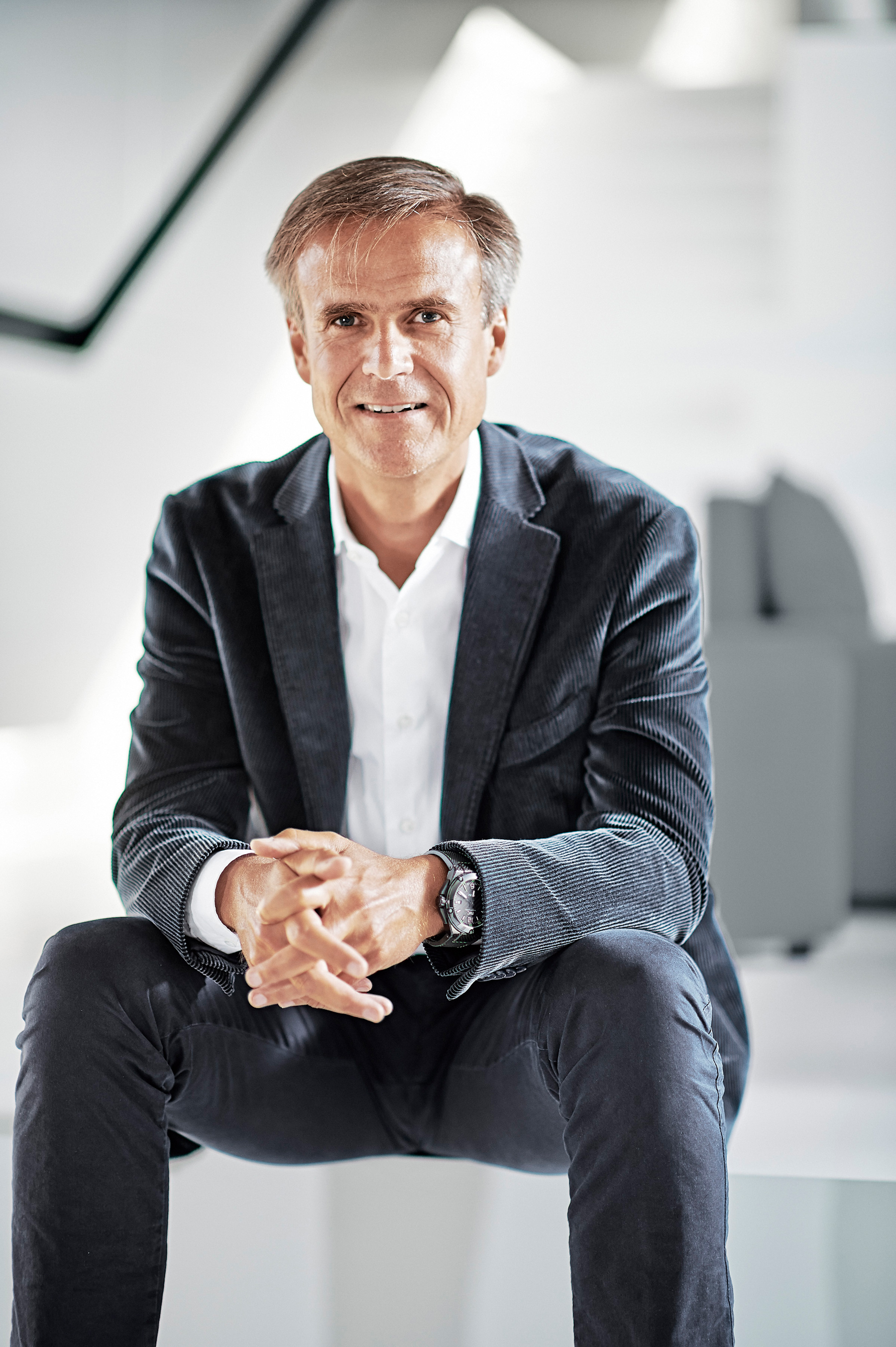 “There are so many people already asking me when [the Taycan] is coming,” says Marc Ouayoun, president and CEO of Porsche Cars Canada. And we’ll find out for ourselves what the Taycan is like to drive when it arrives in dealerships, slated for either later this year or in early 2020. Demand is so strong that Ouayoun believes the first two years of production is already sold out.

“Sustainability is a big, big trend in luxury,” Ouayoun points out. Canada lags behind other countries when it comes to high-speed charging infrastructure and workplace chargers, he adds, although he’s confident we can catch up. In the early days of the automobile, people couldn’t imagine where they’d buy gasoline either.

Porsche, like all major automakers, faces a long, expensive uphill battle to make its business carbon-neutral. The necessary investment is already well underway. The company will spend €6 billion ($9.29 billion) on electric mobility by 2022 to retool factories for EV production, invest in charging infrastructure and new technologies, and add 1,200 new jobs at Porsche’s Zuffenhausen plant in Stuttgart. Some €500 million ($774.51 million) will go toward creating variants of the Taycan, including the SUV-ish Mission E Cross Turismo concept unveiled at the 2018 Geneva Motor Show. Combined, those amounts are just a fraction of what Volkswagen Group is spending on EVs across its many brands. 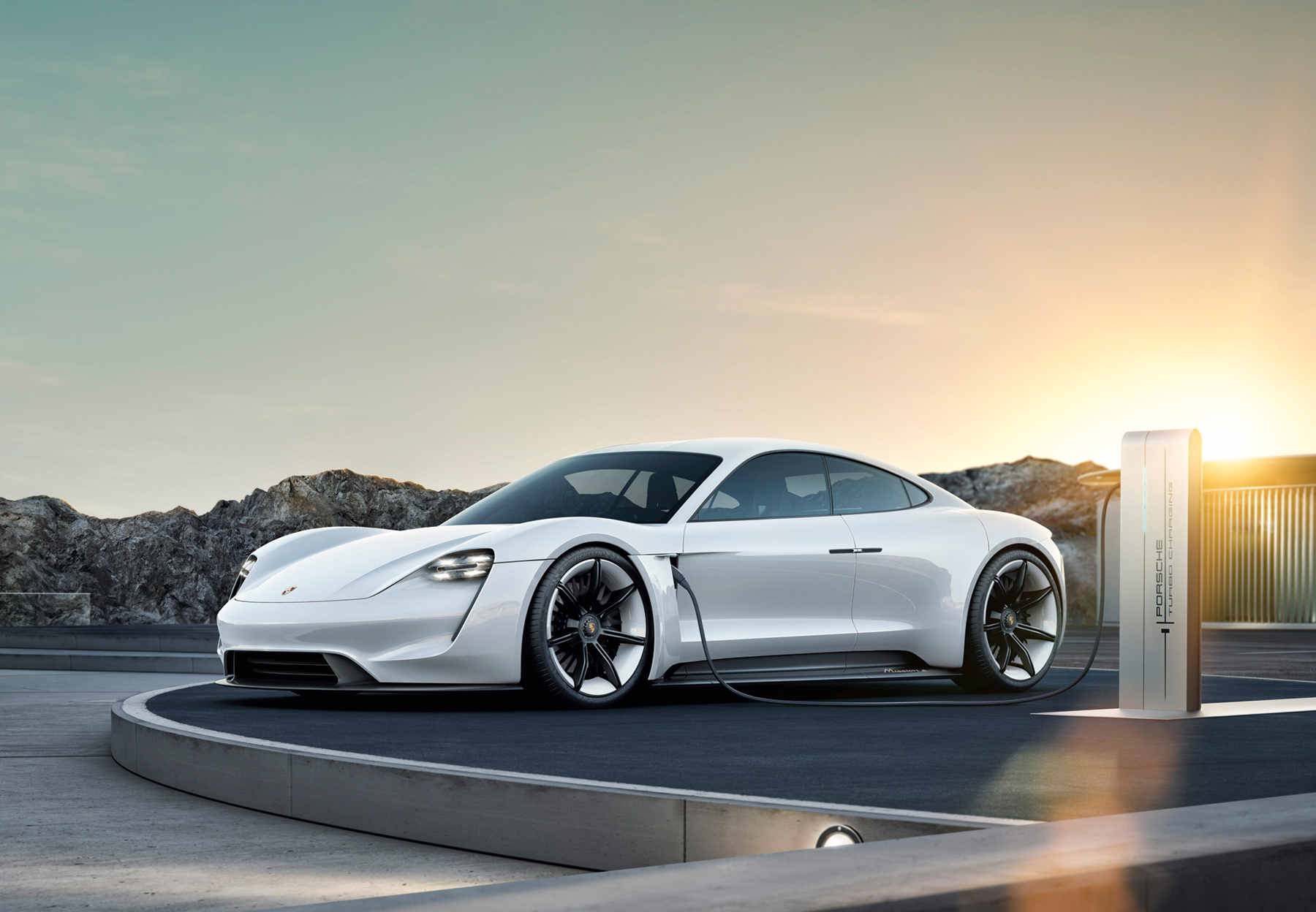 “It’s important to invest, not only in a green car but also in a green factory,” Mauer explains. “Our vision is to have a zero-impact factory…. The Taycan’s will be one of the first real green assembly lines.”

As the first high-performance electric car from a major automaker, the Taycan is wading into uncharted waters with the weight of high expectations on its shoulders. But as far as Mauer is concerned, there has never been a more exciting time to be designing cars — and to be driving them.

Consider the Taycan a canary in the coal mine then, not just for Porsche but for sports cars in general. Tesla’s cars are very fast but don’t come close to the feel, refinement and on-the-limit handling of even a base-model 911. If Porsche gets this right — marrying ultimate performance and ultimate sustainability for the first time in the history of the automobile — drivers have a lot to look forward to.

By Matt Bubbers –  *This article originally appeared in INSIGHT: The Art of Living | Spring 2019

Receive your complimentary subscription to INSIGHT: The Art of Living magazine
SUBSCRIBE TODAY
﻿
BACK
TO TOP