When we think of precious jewels, Marilyn Monroe and her best friend, diamonds, may come to mind. But it’s the brilliantly colourful gemstones — like rubies, sapphires and emeralds, a.k.a. “The Big Three” — that have proven their staying power and the beauty to seduce a new generation of gem lovers. The vibrant red rubies, brilliant blue sapphires and dazzling green emeralds are top-tier when it comes to gemstones, thanks to their rarity and for their association with the older generations of royal families, as well as for romantic intrigue (they’ve triggered expeditions, kindled passion and inspired poetry).

The quest for emeralds has generated some of the earliest recorded mines, which according to the Gemological Institute of America (GIA) in Carlsbad, California, started around 330 BC in Egypt. The most famous are the ancient emerald mines — also known as Cleopatra’s Mines — near Sikait, a mountain valley in Egypt’s Eastern Desert. The site was mined intermittently for the next 1,700 years. Many believed that the emerald would aid in fertility, protect against evil and poisoning, improve eloquence and memory, and even bring visions of the future. According to Victoria Finlay’s book Jewels: A Secret History, Cleopatra was so fanatical about the gem that she used it to adorn nearly everything, from herself and her home to the gifts she gave her lovers (supposedly etched with her likeness). The emerald quickly became synonymous with her reign. 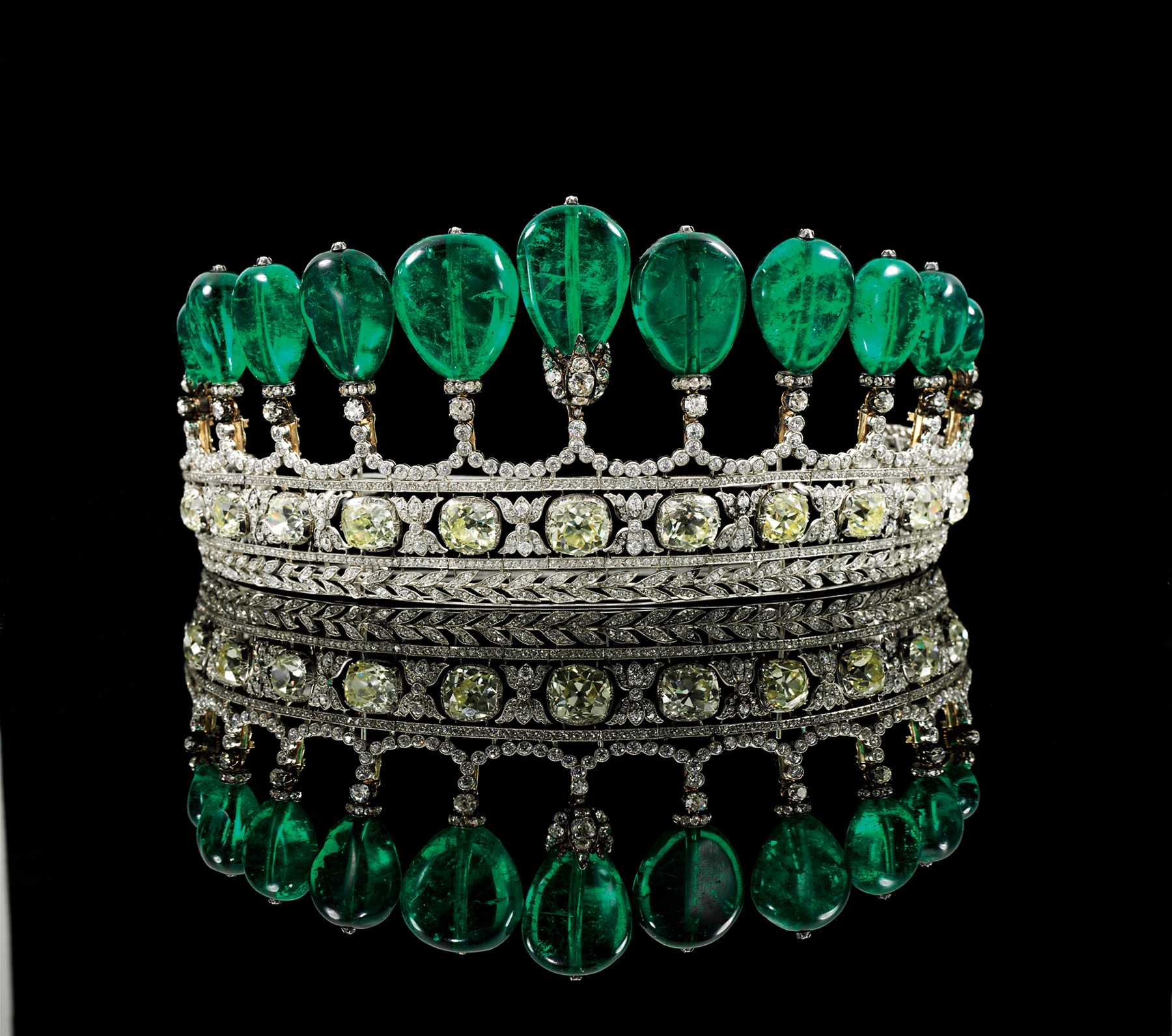 This House of Chaumet emerald and diamond tiara, circa 1900 sold for US $12.7M

Rubies, meanwhile, have a whole different narrative. Traditionally, their country of origin is Burma and they’re often found in marble deposits. Sometimes called “pigeon’s blood,” these bright red gems were referred to in ancient Sanskrit texts as ratnaraj (“king of precious stones”). “I think people are shocked by that, since they still think diamonds are the most expensive stones,” says Katherine Dunnell, a mineralogy and geology technician in the Royal Ontario Museum’s department of natural history.

Last April, Sotheby’s sold a 24.7-carat Burmese ruby ring for an astounding US$11 million, the third most valuable jewel held at auction by Sotheby’s in 2018, beat out only by a necklace once owned by Marie Antoinette, its pendant comprised of an exceptionally rare blue diamond and a pear-shaped pearl.

Burmese rubies, Colombian emeralds and Kashmir and Sri Lankan blue sapphires are all considered benchmark examples of ideal gem colour, tone and saturation, making them the most-sought-after treasures nowadays and, as resources diminish, their value per carat continues to climb skywards. While antique sources for gems, like the thousand-year old Chivor emerald mine in Colombia, are still yielding top-of-the-line stones, others are no longer operational, such as the mines in Kashmir, the Himalayan region straddling India and Pakistan, which have not produced their trademark cornflower blue sapphires since the early 1900s.

A sustainable approach to acquiring gems is to purchase and/or repurpose antique jewellery. Among the stores selling estate or antique pieces directly to customers are Trumpet & Horn in Beverly Hills, Erie Basin in Brooklyn and Cynthia Findlay Antiques in Toronto. Another option would be estate sales and auction houses, from Sotheby’s to smaller venues like Dupuis Fine Jewellery Auctioneers and Waddington’s, both in Toronto, and Doyle in New York.

“The finest emeralds, rubies and sapphires are enormously rare and possess a beauty, which jewellery connoisseurs are instinctively drawn to, and that is reflected in the record prices we have seen at auction in the last decade,” says David Bennett, worldwide chairman of Sotheby’s international jewellery division. 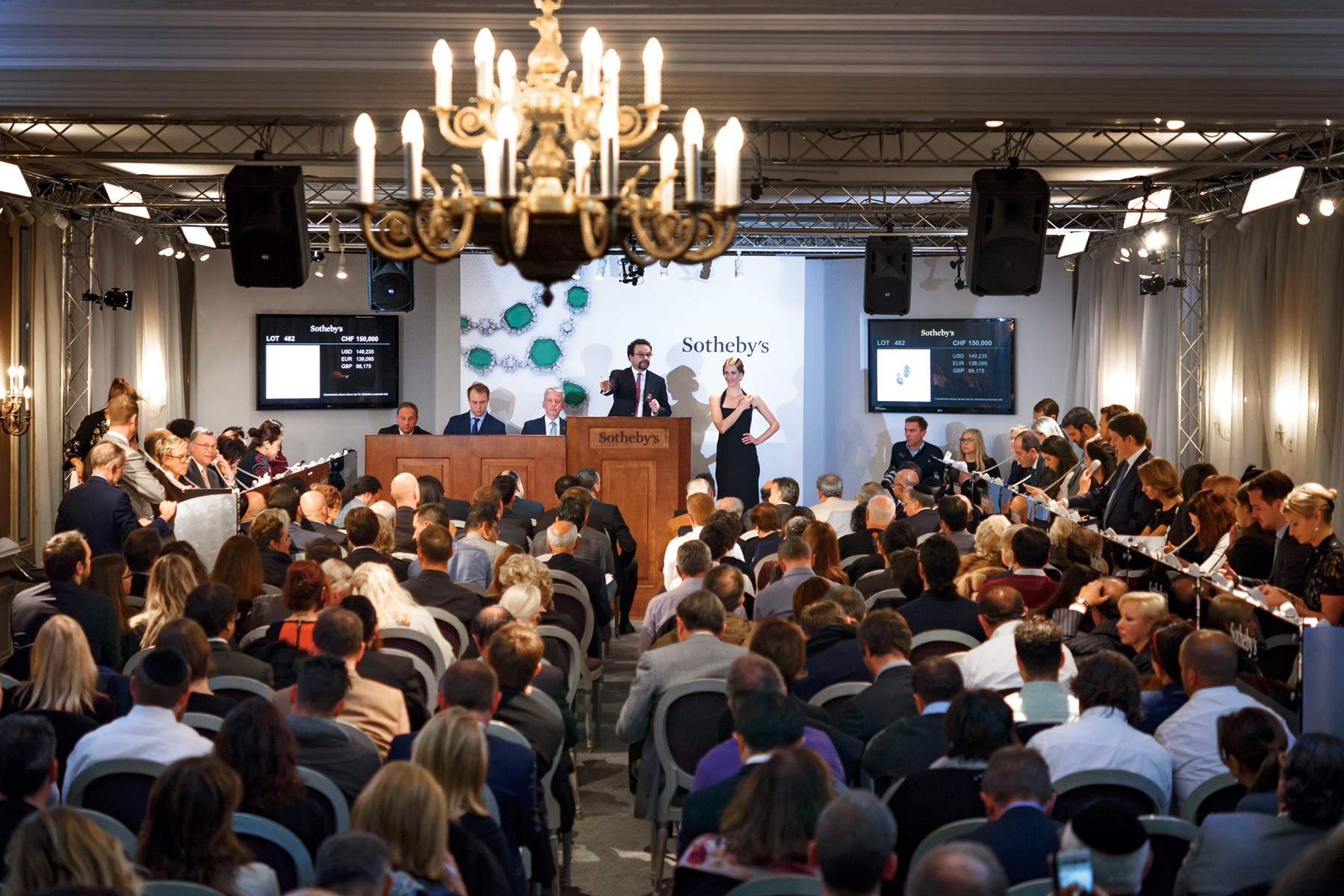 Leading the global auction market for jewellery is Sotheby’s, which holds several jewel sales a year. Specializing in pieces from the 19th century to present-day, the events are held online as well as in major cities — Hong Kong, New York, Paris, London and Geneva — with last year’s bids coming in from 88 countries. Aside from the 2018 banner ruby sale, the house achieved in 2015 the world auction record for the stone with the Sunrise Ruby, which sold in Geneva for US$30.42 million — a result that tripled the previous record set by Sotheby’s only six months earlier.

“The market for exceptional jewels is going from strength to strength,” notes Bennett. “The beauty and rarity of fine coloured gemstones appeal beyond any borders, and the fascination for extraordinary rubies, emeralds and sapphires is universal.” 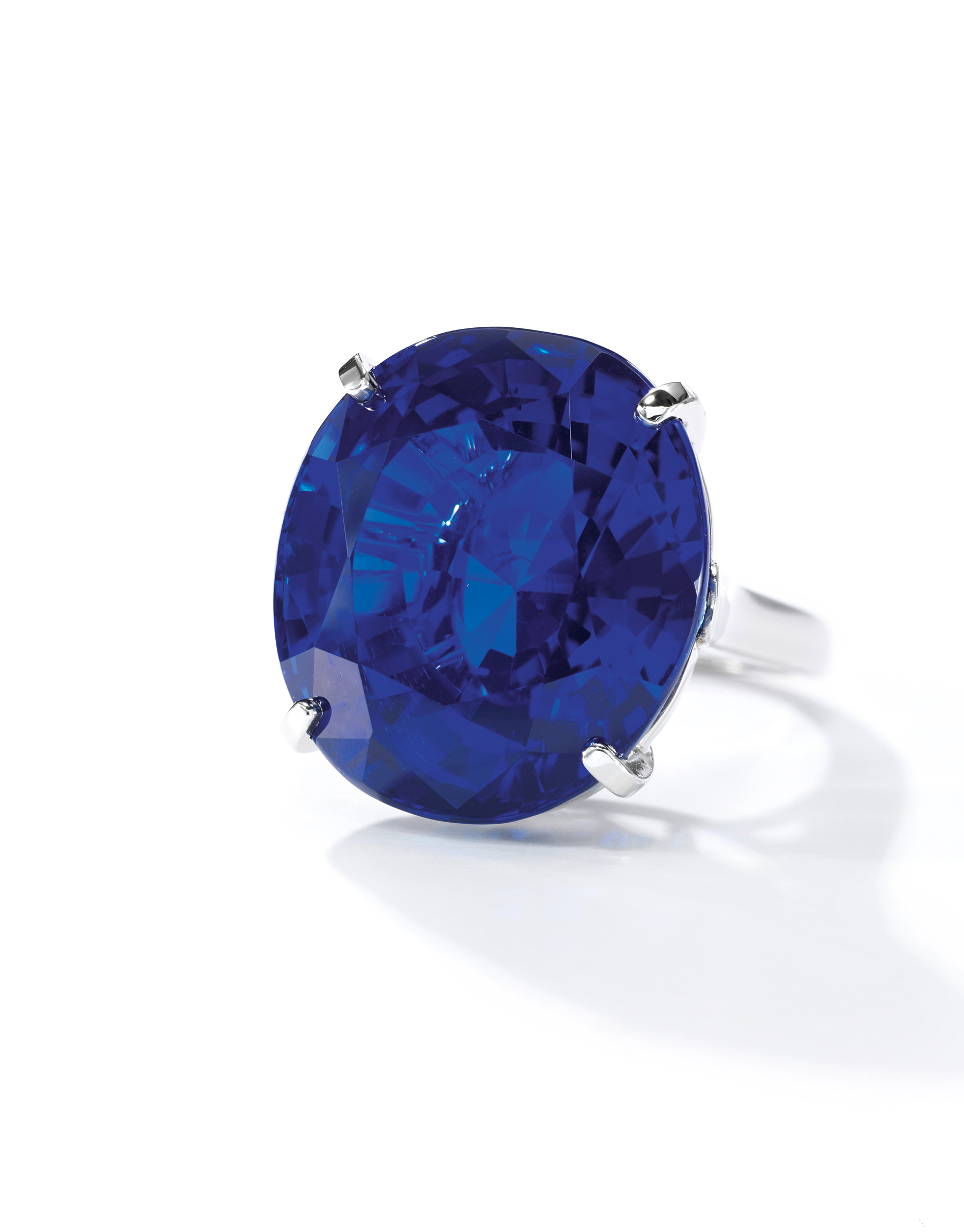 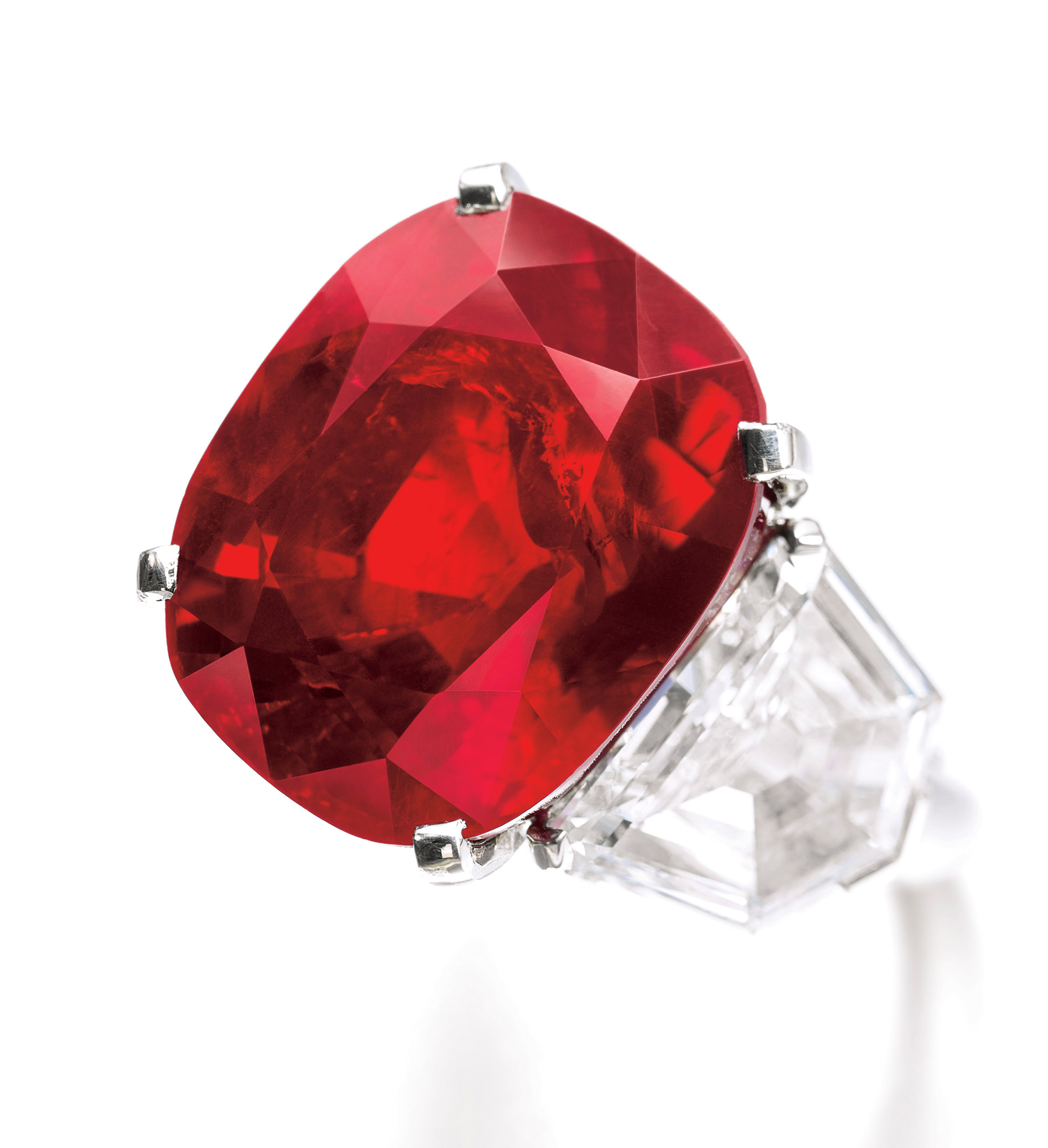 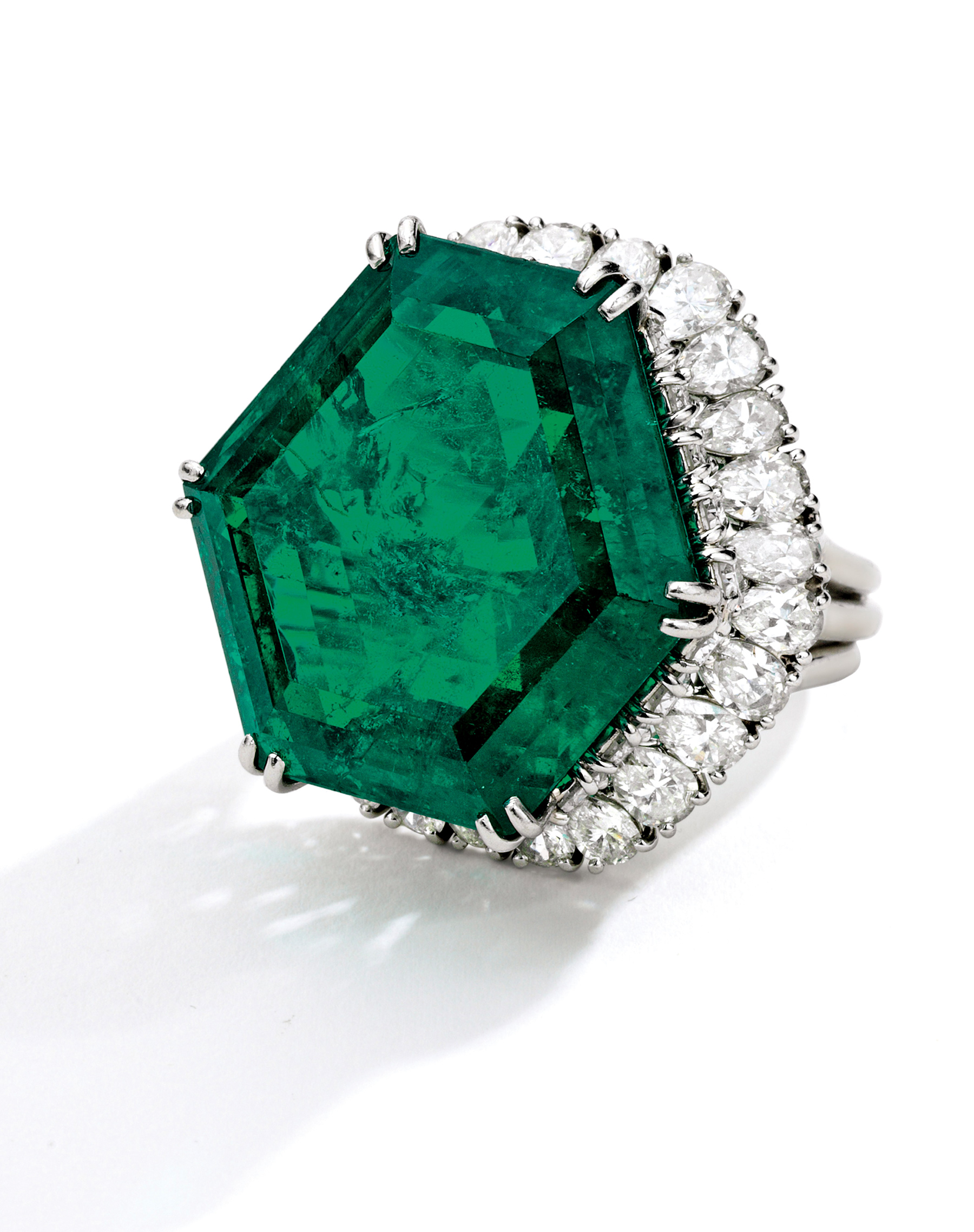 If you’re lucky to have access to family heirlooms or you own pieces that don’t quite resonate anymore, Dunnell suggests going to a local jeweller to recycle the stones with a redesigned setting. Local jewellers can guide you through current trends, value factors for various gemstones and the right redesign approach that could perhaps increase the value of your pieces over time. If you’re interested in sourcing a new stone, working directly with a local gem dealer can also help you understand a particular gem’s provenance.

“Understanding the chain of custody of a gemstone has always been important, but it’s a relatively new concept,” says Robert Weldon, director of GIA’s Gemological Library & Information Center. “We don’t want to own something that represents the degradation of an environment or its social fabric.” The introduction of blockchain technology by gem producers is a new way of tracking the journey of stones from mine to consumer. It’s similar to the Kimberley Process introduced in 2003, a collaboration of diamond corporations aimed to remove “conflict diamonds” from the global supply chain — stones mined in areas of armed conflict and traded illegally to finance the fighting. 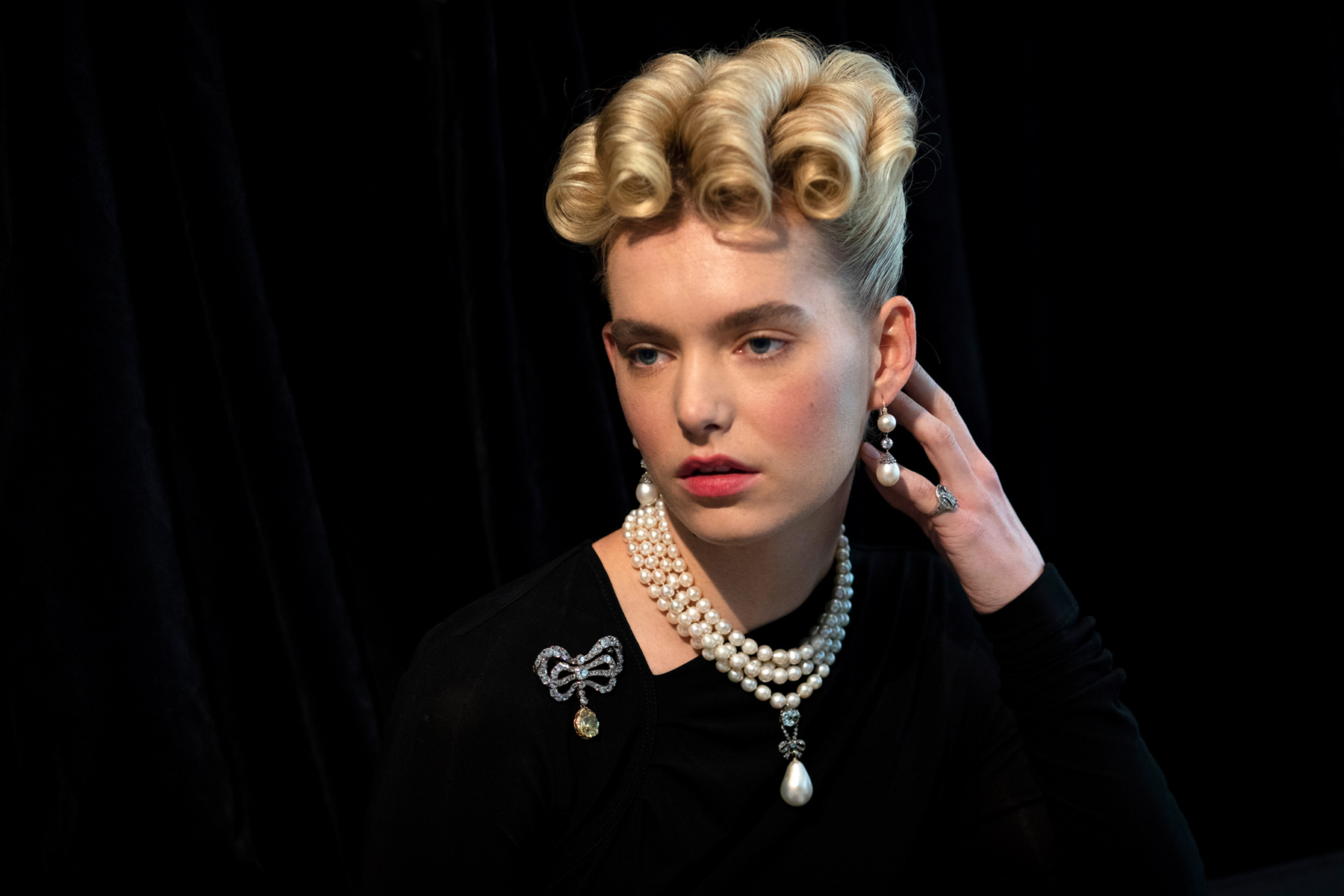 Purchasing gemstones you can have confidence in and connect to is an integral part of owning a piece of jewellery. “Now, everyone is looking for individuality. They want something that speaks to them and also says something about them,” says Weldon. Not only do heritage gems run the gamut of colour options, each stone offers its own fascinating tale of origin and antiquity. It’s a bright new world for modern-day gem lovers looking to make new best friends.

By Megan Kirkwood –  *This article originally appeared in INSIGHT: The Art of Living | Spring 2019