Ornamental grasses, lavender and echinacea sway with the breeze in the weathered-steel planter box fronting the work studio of landscape designer Joel Loblaw. The rusted metal’s warm orange, the earthy browns of fading perennials, errant red and gold fallen leaves — the planter is in sync with the season and it looks perfect, perfectly natural.

In Loblaw design parlance, however, “perfectly natural” means more than just leaving plants alone, post-bloom, with autumn leaves for added mulch. Although this prominent landscape architect takes his cues from nature — hardy native species, low-maintenance plant material, multi-season visual appeal — his approach to landscaping is precise, meticulously planned. “It’s about layering, how the geometry works,” says Loblaw, who set up his eponymous design studio in Toronto in 2011. “There should be a healthy tension between looseness and structure. [For example, together,] hedges and grasses make each other stand out more.” And, he adds, there would be “a little bit of a zinger, a cool, funky touch.” 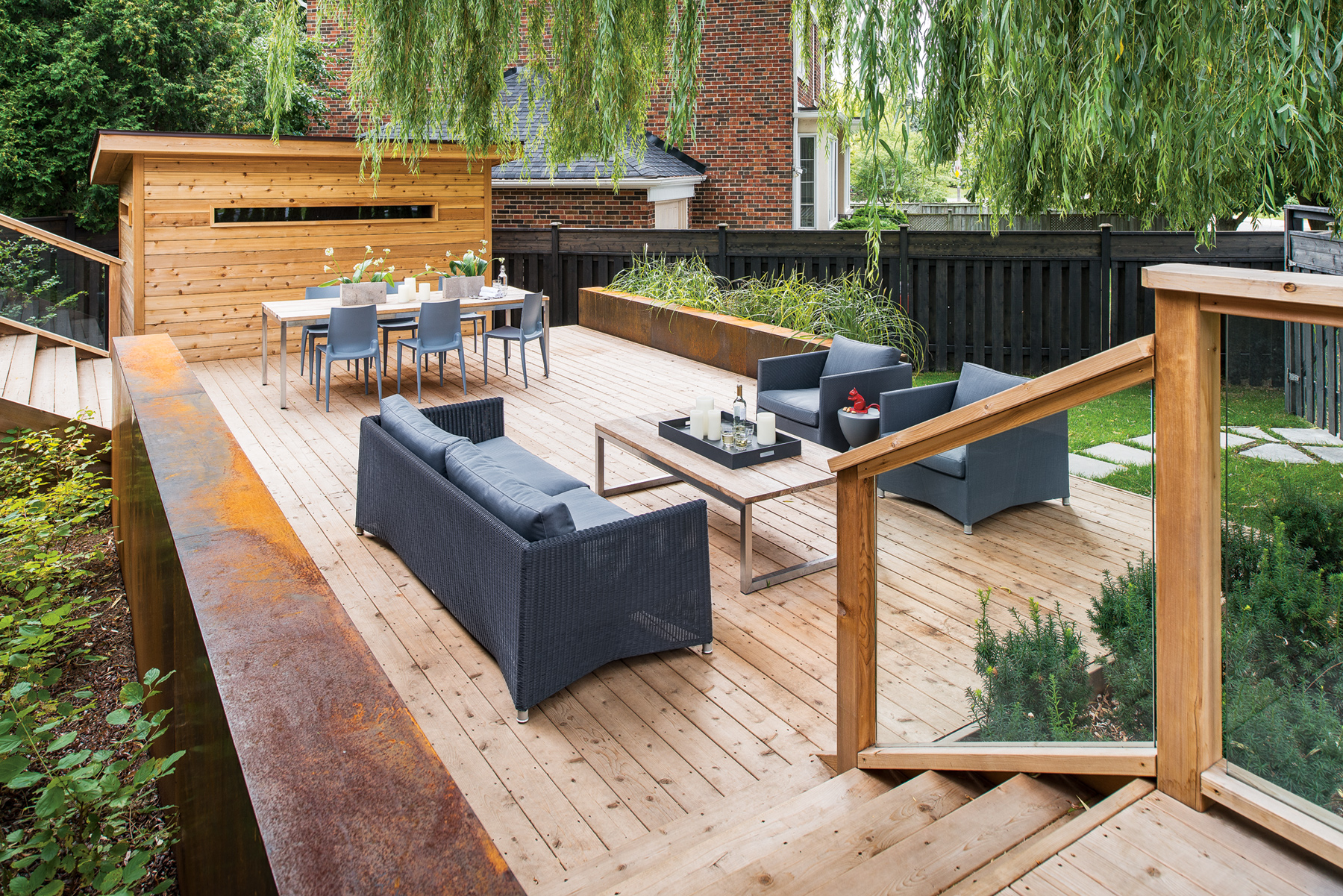 One such zinger is the “architectural lantern” he conceived as an outdoor dining room in midtown Toronto, in Rosedale, which received a lot of attention from the press and was on the cover of a coffee table book on modern design. Inspired by the interior of the client’s house, the 12-by-12-foot raised pavilion has a cedar framework partially walled in by frosted glass panels. In daytime, the glass is a blank canvas to reflect the play of light and shadow from the mature trees and plants on the property. At night, the “room” glows like a lamp, redefining itself as an art installation, the mere visual of it a soothing respite from the stress of life in the city.

As a singular design element for a client living in a penthouse downtown, Loblaw positioned large naturally-rusting metal planter boxes to delineate the outdoor space. Feather reed grasses and columnar trees and shrubs provided contrast to masses of lavender — a distinctly modern, low-maintenance garden that embraces all four seasons. A putting green was even installed along the entire length of the suite. At another property, in Forest Hill, the same bright orange rusted steel was used for walls to frame a tiered cedar deck, anchored at one end by a clean-line storage shed, also in cedar, that had a sliver of a window. The fencing was painted black, so it would, Loblaw explains, “disappear into the landscape.”

Loblaw is partial to designating areas for relaxation and entertaining. Asked to create a peaceful retreat in Markham to echo the ambience of the Muskokas, he retrofitted the client’s spacious garden with an elevated outdoor kitchen, replete with ample space for alfresco dining. He then added a sunken stone patio with a post-and-beam arbour and a border of flowering perennials, select grasses and trim hedges. Another lounging area featured Adirondack chairs around a fire pit.

Those design zingers and Loblaw’s imaginatively functional take on city oases are what his team have become known for. But it’s out-of-town properties that get his creative juices flowing in a special way. “There’s more freedom in the country, usually [a body of] water, more of nature,” he says. “In the city, you are recreating nature.” 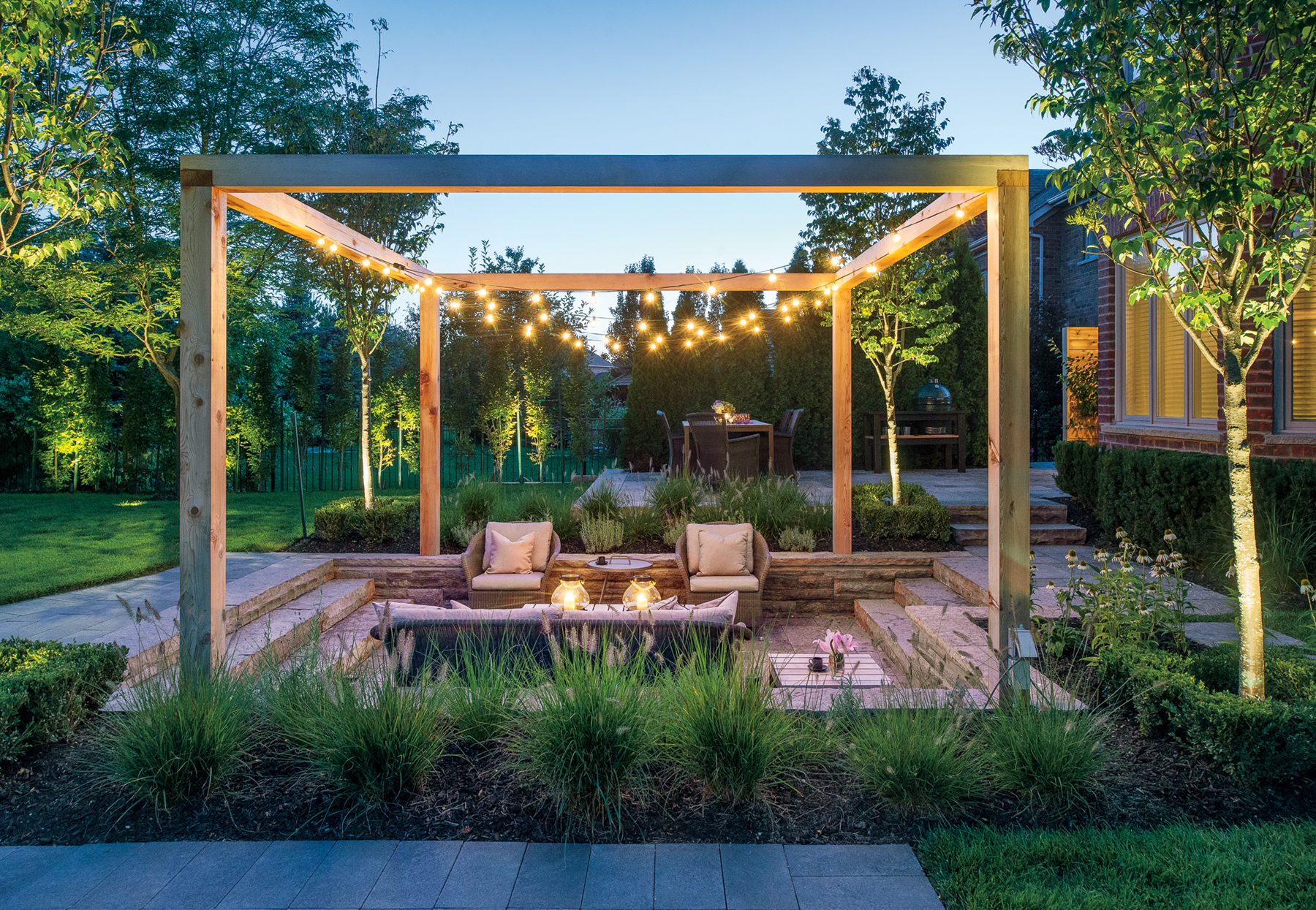 One of the country properties he worked on was a Cape Cod–style home on the shores of Lake Erie, where he ensured that all the mature trees on-site are left untouched. The elegant flagstone pathway he designed is surrounded by mass plantings and leads to a cedar terrace and a stairway down to the beach.

All of the studio’s work comes by way of word of mouth, and he’s typically booked up one year in advance, at least.

“I got into the field because I love the outdoors,” says Loblaw, who is a graduate of Ryerson’s landscape architecture program and, in his younger years, worked in construction and landscaping — a background that likely explains the practical side of his body of work.

He maintains his work-life balance with out-of-office routines. He spends Friday through Sunday at his cottage in the town of Meaford, a two-and-a-half-hour drive from the city. Wednesday night is “art sessions night” with two buddies — an architect and an animator — in his Leslieville home’s garage, converted into a studio. An accomplished abstract painter himself — he had two solo shows in 2018 — Loblaw says “good energy” is what the sessions are all about. “We drink beer, alcohol…we go crazy,” he says, laughing. 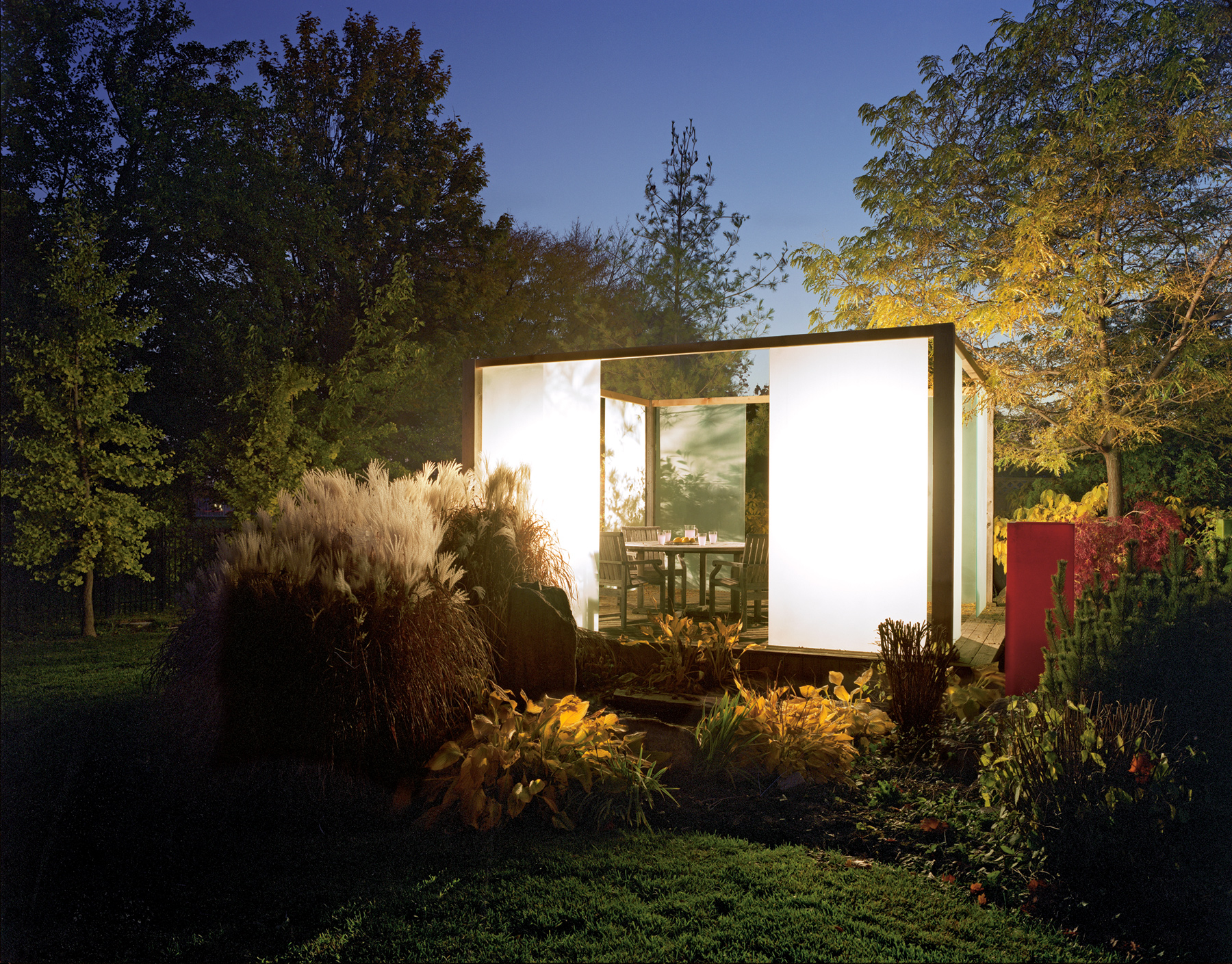 An alfresco dining room created by landscape designer, Joe Loblaw for a client in Toronto

“Joel is the whole package,” notes Lindsy Gregory, who is Loblaw’s business partner and in fact his “big sister,” which is her actual designation on her business card. “He’s a design genius but knows how to run a business and manage clients.”

Gregory, who keeps the studio’s projects on track and on budget and is in charge of financials and client service, is not averse to getting her own hands dirty if necessary, as do the rest of the group. The team is small — four core members, two support staff — and tight-knit, with a harmoniously democratic atmosphere. “Everyone is involved in the creative process,” says Gregory. “Because we’re a small team, we’re all jacks-of-all-trades. And we believe that great ideas come from anywhere and anyone, no matter the [person’s] job title.”

As industry favourites, Loblaw and his team are content. To date, there are no award plaques on the walls of the studio because, well, Joel Loblaw Inc. does not participate in competitions. “My parents have always encouraged me to do what I like to do,” Loblaw says. “And that’s what I’m doing.”

Of course. Why should anything else matter?

By Dali Castro – *This article originally appeared in INSIGHT: The Art of Living | Spring 2019