The two most important words in the transformation process are without a doubt “before” and “after.” This is obvious in terms of physical makeovers — think the well-padded physique that morphs into a lithe silhouette in just under eight weeks — but perhaps not so much in the realm of architecture. Now more than ever, what comes before a building — the historical context and the process behind creating a structure — is just as important as the “after,” the structure itself. An increasing population, environmental awareness and changing workplace patterns are just some of the factors influencing today’s materials and methods.

Perkins + Will, an American architecture and design firm with outposts in Toronto and Vancouver, recognizes that these millennial challenges are here to stay. “We are going to continue to ask more from our environments, particularly as they relate to our health and well-being,” says the firm’s CEO, Phil Harrison. “It’s similar to how we relate to the food we eat. Most of us now think carefully about what kinds of food we put into our bodies. We know the ingredients, the health effects and, sometimes, even the farmers who grow and harvest it. Now, we’re beginning to think of space in a similar way.”

A great example of this, and one that Perkins + Will has already adopted, is Fitwel (Facility Innovations Toward Wellness Environment Leadership), a collaboration between the U.S. Centers for Disease Control and Prevention (CDC) and General Services Administration (GSA). Fitwel is a new healthy-workplace rating system administered by the New York–based non-profit Center for Active Design. Notes Harrison, “Fitwel considers how our built environments — namely, our workplaces — can help us live healthier lives, and it is quickly gaining traction with building owners, cities and design firms worldwide.” Indeed, the firm is committed to certifying all of its North American offices to the Fitwel standard, features of which include everything from treadmill desks and naturally lit workstations to a dedicated space for secure bicycle parking, on-site showers and lockers, so employees are encouraged to cycle to work. 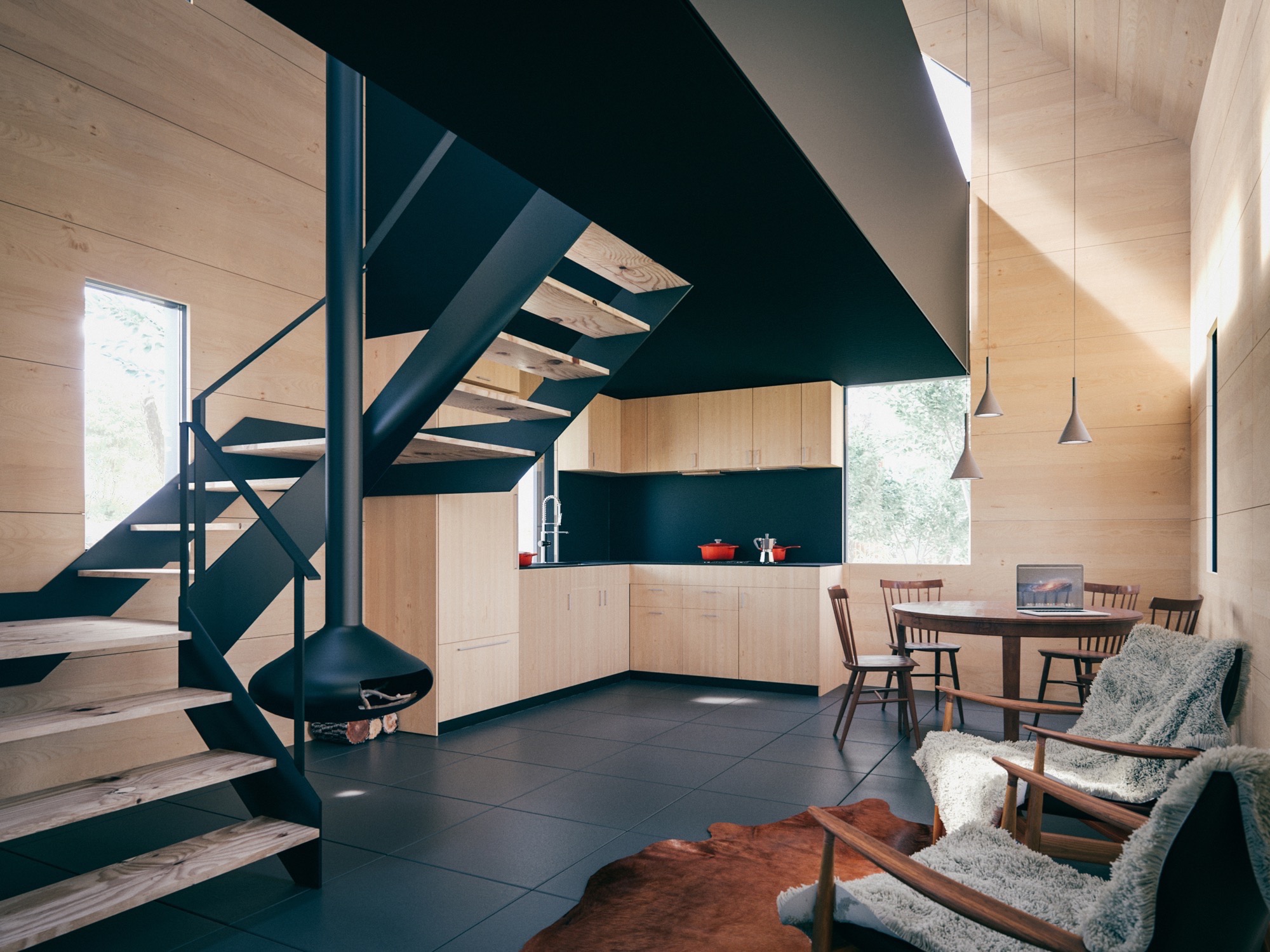 A rendering of one of the barns’ minimalist interiors. Photos courtesy of BH/+visual.com

“Our buildings and cities shape us and they can either help us lead healthier, happier lives or they can do the opposite,” says Harrison. “People are demanding more. As a result, higher-performing, healthier environments will appreciate in value, as will the designers who create them.”

Designing through a prism of sustainable led Perkins + Wil, not to newly developed material but, rather, to one of Earth’s original building blocks — wood. “[Wood] is one of the oldest and most beautiful construction materials in the world,” says Harrison. “Modern codes and the perceived advantages of concrete and steel have led us away from wood for the past 100 years, but today modern fabrication techniques allow us to use composite wood assemblies to enable us to build larger structures. Many industrial buildings around the world from the 1800s were made by similar means.”

With this in mind, the firm dubbed its conceptual research of larger tall timber structures the “River Beech Tower,” based on a proposed 80-storey timber residential high-rise to be situated along the Chicago River. Harrison admits it is not without challenges. “Working with world-class engineers, we are solving the technical limitations of such structures,” he says. These limitations include code- and fire-related issues and timber’s structural engineering feasibility. The firm’s River Beech team — a core group of six to eight people — have set a long-term research commitment to the project with yearly milestones. Their next step was to fabricate a series of partial prototypes this past summer, which they hope will lead to a full-scale, two-storey mock-up of a portion of the tower later in the year. “What we learn from that process will set the goals for next year,” says Harrison. “While the River Beech Tower may not get built, we believe the research we’re putting into it makes it much more likely that similar structures will be built soon.” 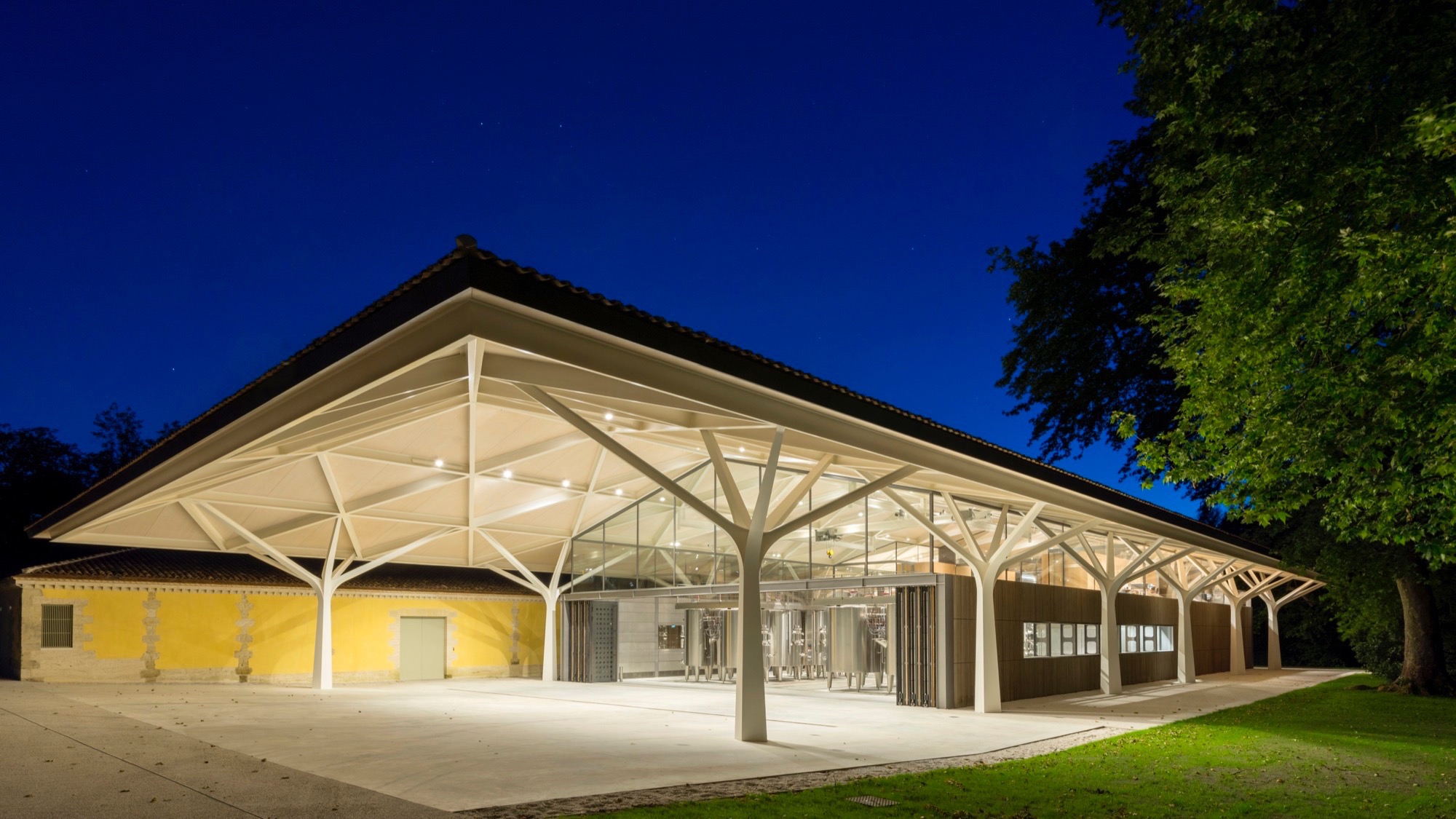 One of the brightly lit interiors of Château Margaux in Bordeaux, France, which was renovated by U.K. architects Foster + Partners.

The challenge of building a modern structure within a storeyed setting was the driving force behind the design of Château Margaux, a 19th-century Bordeaux estate recently revitalized by U.K.-based architects Foster + Partners. Founder and Executive Chairman Norman Foster and his team were tasked with designing the estate’s first new construction in 200 years. “Every building in its time has been a contemporary intervention in a historic context,” says Foster who has worked with of a number of protected buildings around the world, including the Reichstag in Berlin and the British Museum in London. “This work often involves revealing the underlying architectural logic of a building by peeling away unnecessary historical accretions, and a combination of restoration and new construction.”

In developing a master plan for the Margaux estate, Foster + Partners sought to establish a similar sense of clarity in linking together all the new and existing areas in what Foster calls “a considered sequence.” He notes, “The estate was planned as an entire farming village, with the château surrounded by all of the industrial facilities needed for winemaking. You could say that this holistic approach to planning was ahead of its time.” His team’s design retains this connection between process and architecture: the existing buildings were restored to their original design intent and, in some cases, given new functions. To balance the overall composition, a new winery extends from one wing. “In its simplicity, this highly flexible, open enclosure reinterprets the form of the original industrial buildings,” says Foster. “It has a pitched roof at the same level, supported by tree-shaped load-bearing columns and punctuated by light wells. Its design is a natural successor to the vernacular tradition of the big roofed agricultural buildings of the region, but uses today’s technology and construction methods.”

Closer to home, the Vancouver-based Leckie Studio Architecture + Design is upending the notion of what a recreational property is with its revolutionary Backcountry Hut Company (BHC). “It was founded to assist in the design and construction of affordable outdoor recreation structures,” says founder and principal architect Michael Leckie. Inspired by IKEA’s business model of accessible, well-designed products, Leckie devised the easy-to-assemble structure — just four posts, four beams and a roof — as a turnkey solution to housing through a prefabricated system. “The ‘kit of parts’ hut system is designed as an engineered-wood post-and-beam skeleton that is then infilled with prefabricated panels,” says Leckie.

“The whole assembly can be erected by volunteers in the tradition of the community barn-raising process.”

While the method is relatively traditional, it is the efficient use of highly sustainable materials and the zero-waste manner in which the assemblies are put together that set BHC apart. “Our prefabrication method allows for an economy and conservation of material and energy usage in the production and assembly of the building components,” says Leckie. “We use materials that are precut to size at the time of original milling, thus minimizing waste. 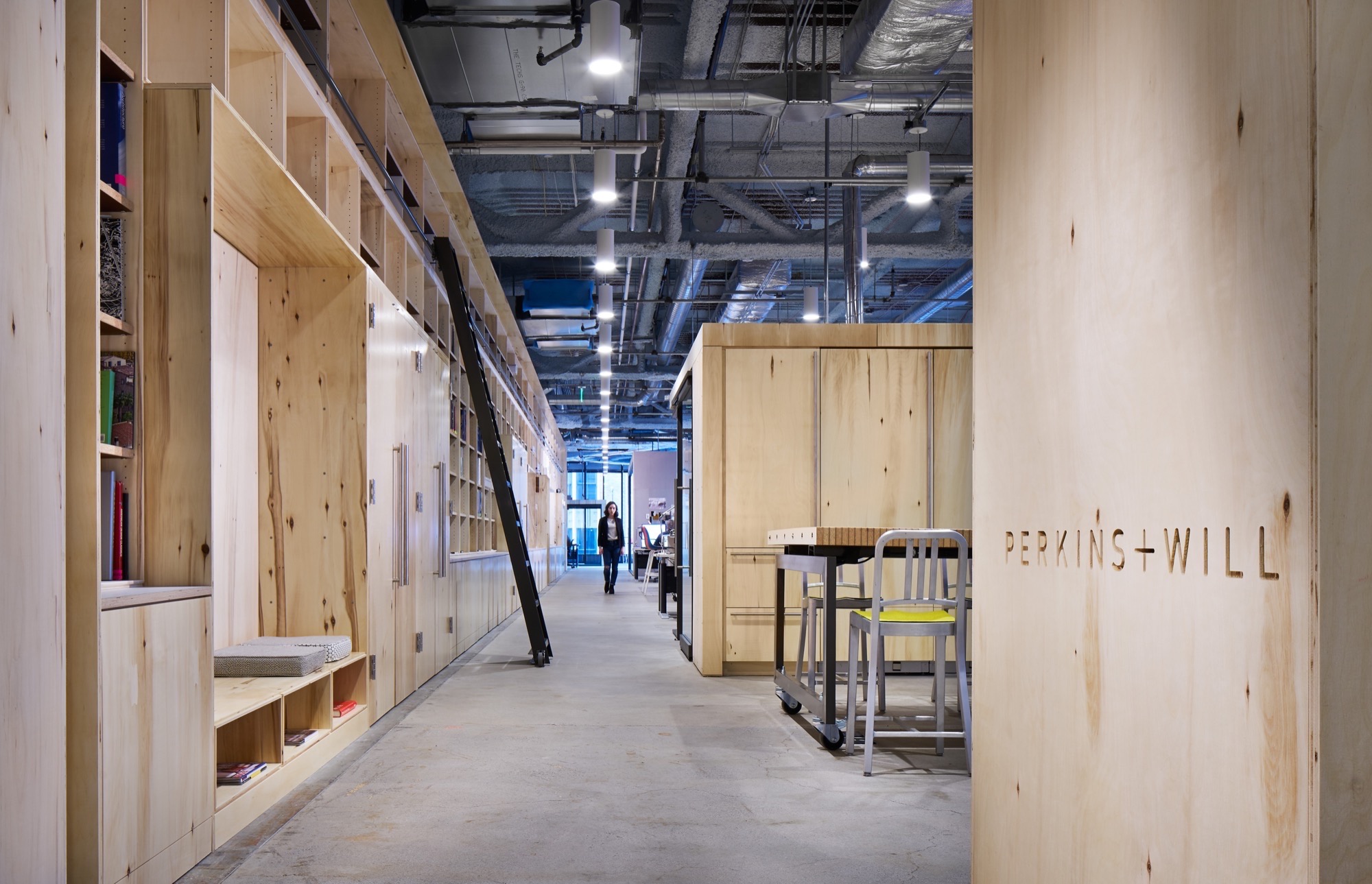 The CDC established a healthy workplace rating system that is being adapted by health-conscious businesses like architecture firm, Perkins and Will, seen here.

Each component is then flat-packed onto pallets for shipping to a location close to the site, then transported via air or off-road vehicles. Site preparation is minimal and requires no use of heavy machinery for minimal site disruption. Piling holes are hand-dug and concrete is then poured into Sonotubes to form the piles for the foundation.”

It is also the actual size of the foundation that is impactful — the huts are offered in four sizes with the smallest option clocking in at just 191 square feet. “One of the single biggest things that we can do to proactively reduce the negative impact of human population growth is to reduce our footprint,” says Leckie. “One of the [ways] is to live in smaller dwellings.”

Which ties in nicely with the end goal of that smaller, more efficient silhouette. Or, as Leckie says, quoting the iconic industrial designer Dieter Rams, “Less, but better.”

By Christy Wright – *This article originally appeared in INSIGHT: The Art of Living | Fall 2017

INSIGHT: The Art of Living Spring 2017