The Musgrave Estate is a supremely unique assemblage of four land titles spanning 232 acres on Salt Spring Island. The current owners seek a buyer intent on operating as a steward of the land, conserving its natural and historic character.

The only stretch of flat, open land on the island’s relatively undeveloped southwest corner, the property features roughly 5,955 feet of oceanfront, making it one of the most desirable areas Salt Spring Island has to offer. Central to this shoreline, is a protected bay with a pristine beach, two docks and boathouse. The property faces west across Sansum Narrows toward Cowichan Bay and Vancouver Island with eight 19th and 20th century abodes complementing open fields, Cedar and Douglas fir forests, and a year-round creek.

The surrounding fields have been identified by local viticulturists as having perhaps the best vineyard potential in the region. Here, sun exposure, soil fertility, and steady westerly breezes provide optimal growing conditions for a variety of grapes.

Designed by Chicago Architect David Adler and set back from the water’s edge for privacy, the 3,558 square foot, six-bedroom, four-bathroom main house, built circa 1941, surrounds a generous courtyard. The covered porch front entry overlooking the ocean and tennis court is a gathering place that sets the tone of the house and property. A grand fireplace punctuates the vaulted ceiling living/great room, while formal gardens and a Timothy hay field slope gently to the shore and the hidden beach. Here, the kitchen area has sustained water damage, with the owners opting to allow the buyers to complete a remodel to their own specifications.

High on a bluff with commanding ocean views sits the cedar-sided farmhouse. Built circa 1985, the lofted home counts two bedrooms, a single bathroom, kitchen, dining room, living room with vaulted ceiling, and fireplace. A covered porch has views of fields, a beautiful old barn, and the ocean through the trees.

The 3,855 square foot caretaker’s house, a two-story, five-bedroom, two-bathroom residence was built circa 1912 with a large utility room workshop added later. A large deck at the front opens into a grand hall with a wide stairway leading to the second floor with five generously sized bedrooms and a bathroom. The main floor has a kitchen with views of the farm entry and fields beyond. The living and dining rooms both feature ocean views.

Tucked away in the forest is the quaint 624 square foot creek side guest cottage with two bedrooms, a sitting room, and bathroom. It is a favorite spot for owners and guests seeking solitude and a great night’s sleep. This building is currently untenable due to the collapse of a fir tree through the roof. Repairs were planned along with the main house kitchen remodel.

The harbor town of Ganges is a bustling center of island culture, entertainment and shopping. It and the amenities and cultural aspects of the Island are internationally recognized and the region has become increasingly popular as a destination in and of itself. During the summer, the island bustles with boaters and yachts that come to experience the beauty and charm of Salt Spring and the surrounding Gulf Islands. Among these, anglers enjoy exceptional fishing for halibut, bottom fish and all species of Pacific salmon. 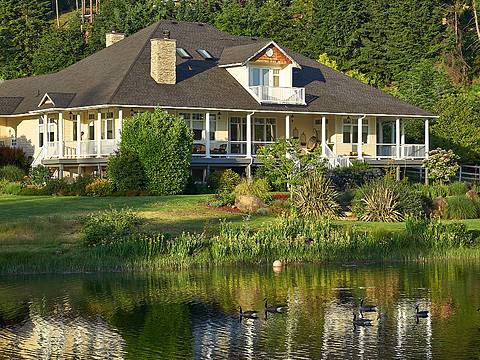 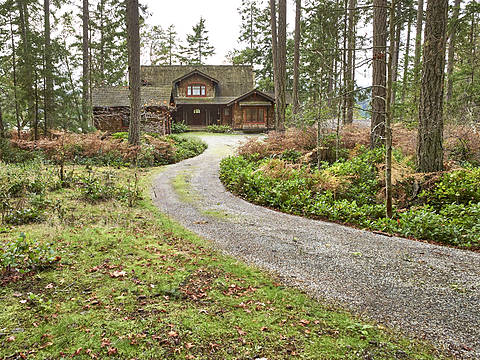