Soaring above the waters of the Haro Strait, Eagle’s Landing is the pinnacle of luxury living in Victoria’s agrarian Central Saanich district. Here, over eight acres of extremely private grounds along 650 feet of ocean frontage bask in views of the nearby San Juan and Gulf Islands with Mount Baker rising prominently from the distant Cascade Range.

The perfect escape for families or those who enjoy hosting guests, this residence features multiple kitchens, the main boasting commercial-grade appliances including a built-in pizza oven as well as a butler’s pantry. Wet bars also complement both the great room and games room with its accompanying cooled wine room and two person Turkish steam room. For those with an affinity for tobacco, the nearby office is fitted with a cigar fan, oversized sliding patio doors, and beautifully refinished built-in cabinetry.

Above the home’s north wing, a private staircase leads to the opulent primary suite. This sanctumis afforded its own office surveying the property entrance, a vaulted ceiling bedroom warmed by a locally manufactured linear fireplace overlooking the ocean, dual walk-in closets with dumbwaiter service to the pantry below, as well as a grand ensuite bathroom retreat featuring dual vanities and toilet rooms with bidets, a makeup counter, an oversized built-in soaker tub, and a magnificent ocean view dual oversized shower/wetroom with meditation/massage area.

An outdoor living dream, the home’s 7,000 square foot building-length patio is accessible from nearly every room on the main floor. This space features multiple open and covered lounge areas and several distinctive accoutrements including two log lighting equipped wood-burning fire pits with integrated seating. The vortexing pit provides cover from the ocean breeze as its sparks and smoke spiral skywards, while the sunken pit floats above the lily pond offering timeless views of the illuminated grounds and the ocean below. Outdoor cooking areas are located just outside the main indoor kitchen, as well as in the oceanfront dining gazebo with its own water supply and charcoal barbeque.

The home has been fitted with a plethora of efficient modern technology including a Control 4 smart home system, designer LED lighting, remote blackout blinds, commercial Wi-Fi, integrated indoor/outdoor wireless sound, energy efficient window tinting, and 80 zones of radiant in-floor heating. To accommodate vehicles, two double garages (one attached and one detached with workshop) are located at the north and south ends of the home, while multiple parking pads are also available for overflow or oversized equipment.

An open-air paradise, the estate boasts an abundance of unique outdoor elements, most notable being the oceanfront water feature (one of the largest residential manmade water features on the island). This veritable stream, tumbles down from a waterfall mountain at the property’s north eastern corner and winds the length of the shoreline, beneath underlit floating patio elements, finally terminating at the grandiose lower lagoon with its gushing central fountain and waterside yoga/meditation/exercise deck.

A myriad of walking paths meander throughout the fully irrigated grounds which have been primed with continually blossoming vegetation in addition to the mature orchard of apples, pears, nectarines, plums, cherries, and figs. These paths connect the various outbuildings and enclaves including a tennis court, a pond-side aviary, a caretaker’s house, and three beautiful heated/cooled greenhouses, the largest of which harbours several healthy citrus trees.

This magnificent estate sits at the end of a quiet no-through road, just south of the celebrated Island View Beach. Stretching away from the water to the east, the beautiful Martindale Valley with its collection of vegetable farms is flush with wildlife and is known particularly as a birder’s mecca due to its great diversity of local and migratory birds including ducks, larks, pheasants, shorebirds, hawks, owls and of course, eagles. This area is ideally located between Victoria’s historic and lively city core to the south, and northern tip of the Saanich Peninsula to the north with convenient off-island access available at the Swartz Bay ferry terminal or the Victoria International Airport.

For those in search of the ultimate in conveniently secluded living on Vancouver Island, Eagle’s Landing is peerless.

Friendly and active, this quaint farming community in the middle of the Saanich Peninsula offers a comfortable rural lifestyle for those seeking refuge from the inner city’s hustle and bustle. The short 20-minute commute from Victoria's city core makes Central Saanich an easy transition for any city dweller. The municipality remains committed to celebrating and preserving its rural roots, boasting the highest concentration of agricultural production in the region.

REAL ESTATE
Whether searching for a private acreage or an ocean front home, Central Saanich will not leave buyers disappointed. Many properties available on the market offer the potential for full custom builds, rezoning, subdivision, and industrial or commercial development.

LIFESTYLE & RECREATION
Brentwood Bay Village is host to all amenities including waterfront restaurants, marina’s, shopping, and accommodation, while Saanichton boasts a collection of bed and breakfasts, stables, campgrounds, and small farms amongst its famous flower and rose gardens.

More than a million visitors a year flock to the Butchart Gardens to experience fireworks, light displays, ocean views, and spectacular floral displays featured in multiple character gardens, along the paths, and beside the estate’s beautiful lawns. For a more exotic adventure, Victoria Butterfly Gardens offers visitors the chance to explore an indoor tropical rainforest full of free roaming butterfly’s, insects, birds, and plants.

There is no shortage of outdoor adventure in Central Saanich. From the expansive hiking trails of Gowlland Tod Provincial Park, to the elevated lakes of Mount Work Regional park, residents are blessed with a huge variety of natural beauty, and a fascinating variety of flora and fauna. Centennial Park also offers those with a more competitive streak access to a lacrosse box, soccer pitches, baseball and softball fields, picnic shelters, horseshoe pitches, tennis courts, a bowling green, a children’s playground, and the Centennial Park Fieldhouse.

To the east sits Island View Beach Regional Park, an incredible, easy-walking trail with sandy beach access, and public boat launch. Boasting stunning view of Haro Strait, as well as James and Sidney Islands, it is one of the best places to see Mount Baker on the island. Island View Beach is a favorite of bird watchers and paleontologists alike as many fossils have been discovered on the shores. To the west of the community is the Saanich Inlet, a well-studied marine environment that is helping to expand scientists understanding of our oceans.

Central Saanich is a tight knit community that hosts many events throughout the year. A highlight during the early summer is the Brentwood Bay Festival, a community event boasting a parade with a full market of local crafts, artisans and produce. The festival also features a stage with performers from around British Columbia. Music in the park is a weekly event that occurs in July and August featuring musicians, food vendors and a great sense of community. The most notable even of the year is the Saanich Fair, one of the longest running fairs in British Columbia, and the West Coast's oldest agricultural fair. Established in 1871, it is held in Saanichton every September, drawing in people from all over the greater Victoria area.

AMENITIES & TRANSPORTATION
With a population of approximately 16,000, this semi-rural community has over 30 restaurants, bars and coffee shops. Central Saanich has an average Walk Score of 35, meaning most errands will require a car. That being said, residents enjoy easy access by car or public transit to Victoria, the Victoria International Airport, and the BC Ferries terminals at Swartz Bay and Brentwood/Mill Bay. For the adventurous, the northern trailhead of the Lochside Trail, a former railway line converted to bike path, stretches from Swartz Bay to Victoria, passing through some of the islands most beautiful countryside.

HISTORY
Home to the Tsawout and Tsartlip First Nations for thousands of years, the name Saanich means "elevated" in the Salish language, possibly in reference to nearby Mount Newton. The first European settlers arrived in what is now Central Saanich in 1855. By the early 1900’s, both the Victoria and Sidney Railway (V&S), and BC Electric Railway were in operation, with service to Victoria, Sydney, and Saanichton, while barges carried cement from the BC Cement factory at Tod Inlet (now the famous Canadian National Historic Site, Butchart Gardens) around the Saanich Peninsula to Victoria’s Inner Harbour to be shipped off to international markets. Incorporated as a district municipality in 1950, The area’s highly fertile soil, prized by its early community of mostly farmers, rewarded their toils growing hops, fruit, grain, and berries, finally resulting in the bustling district of homes, businesses, small working farms, vineyards, and cideries of today.

LOCATION
Central Saanich is one of three district municipalities located on the Saanich Peninsula of Vancouver Island, about 21 km north of Victoria, and includes the communities of Saanichton and Brentwood Bay. Central Saanich is surrounded to the North by the District of North Saanich, to the South by the District of Saanich, to the east by the Haro Strait, and to the west by the Saanich Inlet. 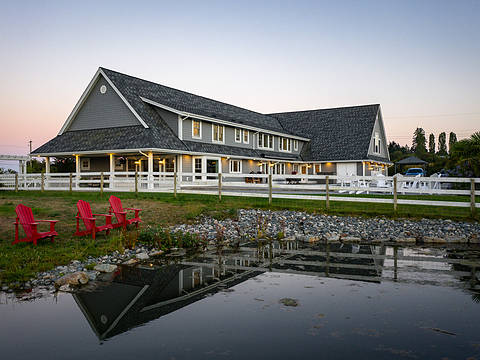 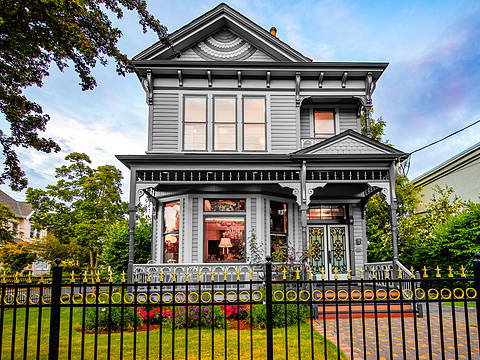 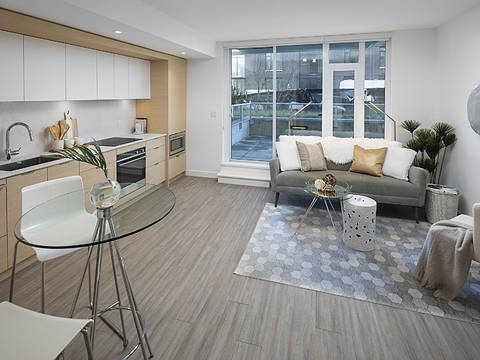 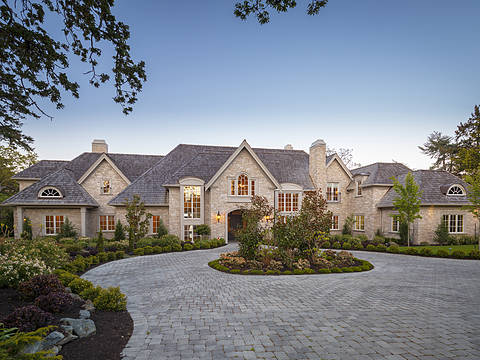