To live at Le Château is to enjoy timeless luxury and historical significance. Originally commissioned by the owner of La Presse newspaper at the time, it was constructed between 1925 and 1926 by Ross and Macdonald, one of Canada’s most notable architecture firms in the early 20th century. At its inception, it became the most prestigious residence in Montreal, an honour that still stands today. Meticulously and beautifully maintained, old world charm meets modern prestige in this Montreal landmark.

The design of Le Château Apartments pays homage to the castle forms of the French renaissance châteaux and to the fortified houses of Scotland. The notable façade, made of Tyndall limestone from Manitoba, showcases fossils dating from before the last ice age. The roof is made from copper, a characteristic common in the grand railway hotels across Canada. Architectural ornamentations are sculpted from Indiana limestone, a decorative touch on the steel structure.

Age has only perfected the allure of the building for the most discerning owners. White gloved valets greet arrivals, and uniformed doormen ensure all conveniences are granted. As a resident of Le Château you’re in good company; the building is home to many famous residents including past occupant Mordecai Richler, who called the Le Château home for more than 20 years.

This high distinction residence is surrounded by befitting neighbours such as the Ritz-Carlton, the Sofitel, the Mount Royal Club, Holt Renfrew and The Montreal Museum of Fine Arts. A short walk from McGill and Concordia, the building’s Golden Square Mile location provides boutiques and restaurants near elegant Sherbrooke Street. 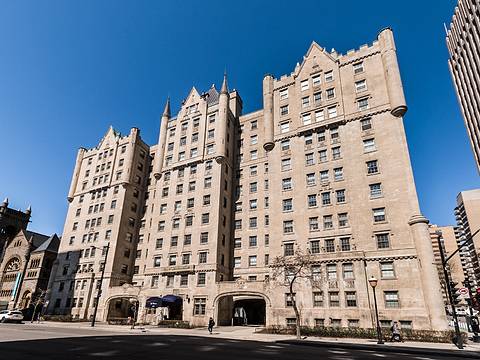 ﻿Home/Developments/Le Château
BACK
TO TOP